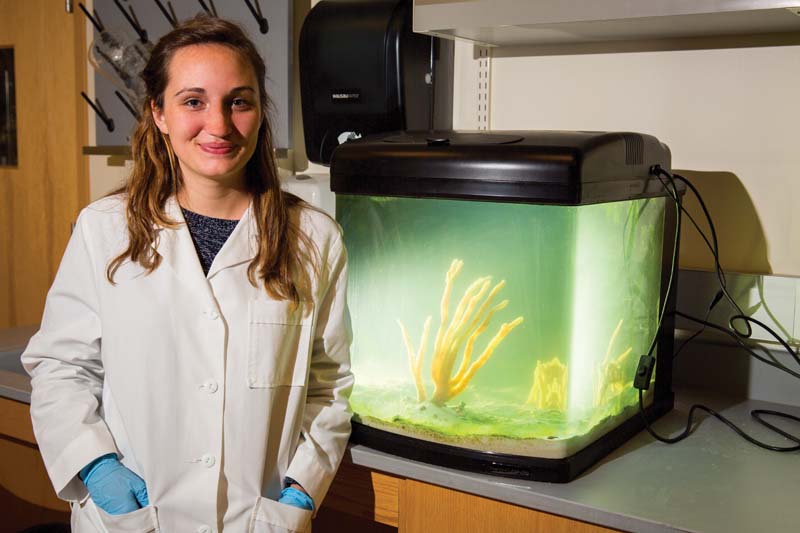 Savannah Barnett ’15 has been intrigued by the process of extracting anti-cancer compounds
from marine sponges since she came across in the topic in a high-school biology class.

A method for harvesting cancer-fighting compounds from marine sponges, developed by a Longwood student, may prove to be a breakthrough in cancer research.

Marine sponges excrete compounds that are known to kill cancer cells, but the current process of harvesting the compounds involves killing the sponges, which are hard to grow and relatively rare. Savannah Barnett ’15, a chemistry and biology major from Chesapeake, developed a process that successfully extracts the compounds from the water surrounding the sponge. She also has shown that compounds extracted from water retain their cancer-fighting ability, destroying 90 percent of leukemia cells in just three hours.

“Savannah’s extraction method will be a quicker, cheaper and much more efficient way to isolate anti-cancer compounds, and you won’t have to kill the sponges,” said Dr. Amorette Barber, assistant professor of biology, who supervised the biology part of the research. “Her work shows that you can extract these compounds from the water.”

The anti-cancer abilities of these compounds are well-known, but they are not in animal or clinical trials because scientists have not been able to isolate enough of these compounds. “With Savannah’s new isolation method, animal studies may be possible in the future,” said Barber.

Barnett, a member of the Honors College, concentrated the compounds from a two-liter water sample taken once a week from a 55-gallon saltwater tank that contained two orange tree sponges. Biological tests of these extracts confirmed that the compounds have the ability to kill leukemia cells.

Marine sponges excrete toxins as a defense mechanism. Because the toxins are diluted in the surrounding water, they have to be especially strong. Barnett chose the orange tree sponge (Ptilocaulis spiculifer), a rare sponge found in the Caribbean that had previously been shown to produce anti-cancer compounds.

“Savannah’s protocol allows endless extraction of the compounds without jeopardizing the sponge population,” said Dr. Andrew Yeagley, assistant professor of chemistry, who oversaw the chemistry portion of the research.“The compounds have been known since the mid-1990s, but there has been limited testing because their supply is limited and traditional extraction methods provide very little sample to work with. That’s why a new isolation—more specifically a continuous extraction method—is so important.”

In the standard extraction method, called maceration, sponges are ground up into paste from which the compounds are extracted. They pull sponges out of the ocean and grind them up—like in a blender when you make a smoothie,” said Barnett.

Barnett’s research, which she began in January 2014 and completed the following fall semester, was her senior honors research thesis. She has been intrigued by the process of extracting anti-cancer compounds from marine sponges since coming across the topic in a high-school biology class.

Barnett is no stranger to research. She was one of 17 U.S. college students selected in summer 2014 for the American Chemical Society’s Scholars International Research Experiences for Undergraduates program, jointly funded by the National Science Foundation. She was paid to work at the University of Perugia in Italy on a research project that involves using hydrogen as an alternative energy fuel.

After graduating from Longwood, Barnett plans to enter Dartmouth College’s doctoral program in experimental and molecular medicine. She wants to work in medical research and eventually teach college chemistry.