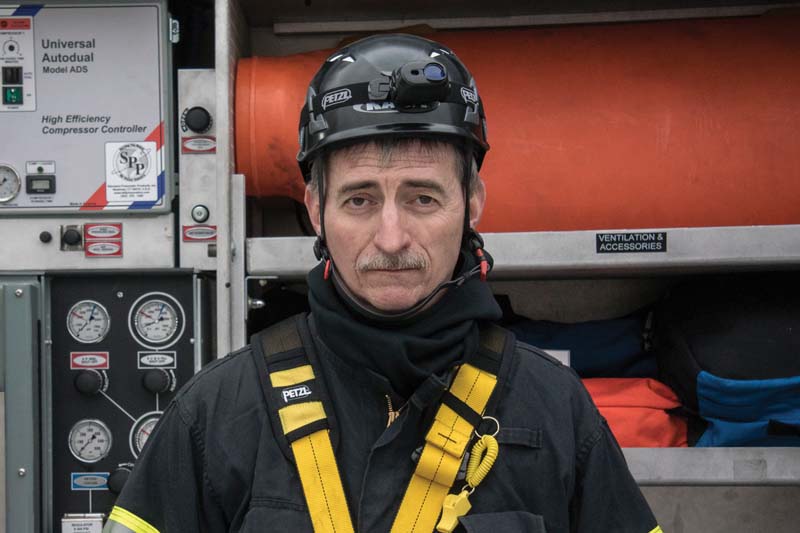 Rob Weiderhold ’88 was responsible for the safety of FBI personnel at the Pentagon after 9/11.

For Rob Weiderhold ’88, work means being around murder and mayhem, often before the dust has settled. His job took him to the Pentagon after 9/11, to the federal office building in Oklahoma City after a domestic terrorist bomb attack in 1995 and to Riyadh, Saudi Arabia, following an al-Qaida bomb attack in 2003. He also worked the anthrax attacks of 2001 and the plane crash the same year—originally thought to possibly be terrorism—in a Queens, N.Y., neighborhood.

Weiderhold is a senior hazardous materials officer in the FBI’s Technical Hazards Response Unit (THRU), which provides specialized technical support to evidence-collection efforts at what the FBI calls “high-hazard” crime scenes, some of which are terrorism-related.

“We’re the guys they call when it’s a challenging crime scene,” said Weiderhold, the leader of a seven-person team, one of the unit’s three teams. “I’ve worked off the sides of tall buildings, off of cliffs, in caves and mines—you name it. If evidence access is complex, our job is to develop, implement and manage access to the collection of evidence.”

Weiderhold, whose job also involves providing training and what he calls “operational response,” was responsible for the safety of FBI personnel at the Pentagon after 9/11, where he spent about 10 days beginning Sept. 12, 2001.

“When I got there, the building was on fire,” he said. “There was a report when I was on scene that another plane would hit the building. When I got the call to evacuate, I thought they meant to evacuate the building, but they wanted us as far away as possible. We went to Arlington National Cemetery to seek cover. I’d be lying if I didn’t admit that was scary.”

‘I’ve worked off the sides of tall buildings, off of cliffs, in caves and mines—you name it.’

In Saudi Arabia in 2003, where 39 people were killed when bombs went off at three residential compounds frequented by Westerners, he and his coworkers were confined to their quarters for two or three days after receiving death threats. With the 2001 anthrax case, he was one of the first people into the building in Boca Raton, Fla., where the first victim died.

“Some of my work is scary, but you have to put your faith in your training, your equipment and your experience,” said Weiderhold, whose background is in the fire service.

“The neat thing about this job is that you can be sitting at your desk doing administrative work one day, and the next day you can be flying across the country or overseas,” he said. “There’s never a dull moment.”

Weiderhold joined the FBI’s Technical Hazards Response Unit in 1999, three years after it was formed. The unit moved five years ago from Quantico to southern Stafford County just outside Fredericksburg.

“I’m taking what I learned in the fire service and using it as a foundation for my work with the FBI,” said Weiderhold, who became a volunteer firefighter at age 16. He is a former chief of the Sterling Volunteer Fire Department and, as a Longwood student, was a member of the Prince Edward Volunteer Rescue Squad.

Before joining the FBI, Weiderhold worked for the Federal Emergency Management Agency, Loudoun County Fire and Rescue, and the International Association of Fire Chiefs.

Weiderhold still keeps in touch with his mentor, Dr. Ken Perkins, then a sociology professor and now provost and vice president for academic affairs. Perkins also is a longtime volunteer firefighter.

“If it weren’t for Dr. Perkins, I would not be working where I am today,” said Weiderhold, who lives in Spotsylvania County with his wife and four children.