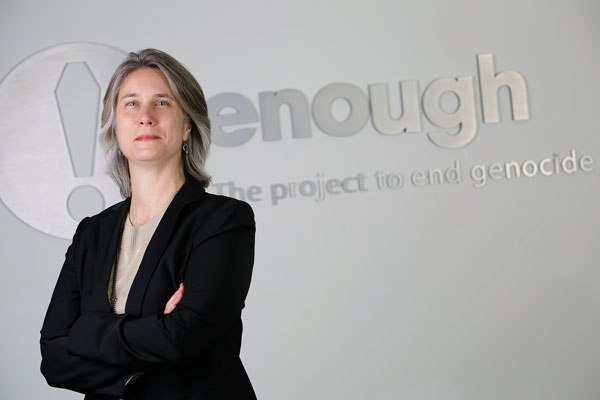 Anna Prow ’88 is managing director and chief operating officer for the Enough Project, based in Washington, D.C.

Anna Prow ’88 developed an affinity for Africa when she worked as a Peace Corps volunteer in Madagascar. It was love at first sight—not a temporary infatuation.

Twenty years later, she continues her commitment to Africa—though mostly long-distance—as managing director and chief operating officer of the Enough Project, a Washington, D.C.-based nonprofit organization aimed at ending genocide and crimes against humanity in Central Africa and the Horn.

“The Enough Project’s mission played a huge part in my taking the position,” said Prow, who, even before she applied, was familiar with the man who’s now her boss, founding director John Prendergast, a human rights activist and best-selling author who has focused on peace in Africa for more than 30 years.

“I liked how the organization used policy analysis, research advocacy and other methods of awareness-raising to affect conditions that are causing genocide and crimes against humanity,” she said. “I wanted to be a part of a group striving to stop the abuse and mistreatment of populations. I believe if we can learn lessons in Central Africa and the Horn, these principles can be applied in other places across the globe.”

A big part of Prow’s job is aligning programs so that the organization can operate efficiently and strategically. I work closely with programmatic staff and the founding director to identify what they’re seeking to achieve,” she said. “By helping to articulate our goals, I can identify ways operationally to make them happen. In the course of the day, I’m weaving together what goes on in different departments. Then, as departments understand each other, they can reduce redundancies and work in more aligned ways.”

There’s also a practical business administration aspect to what Prow does. She makes sure the organization is compliant with grant terms and their 501(c)(3) status, and that they exercise due diligence in business practices.

“Overall, I serve our group so they can look outward. When I joined the Enough Project two years ago, I was fatigued from travel and ready to settle down, but now I’m getting the itch to travel again,” she said.

At Longwood, Prow earned an English degree with the goal of being a teacher, influenced by the experience of having parents from other countries. Her mother was from Newfoundland and her father from Germany.

“I think growing up with parents from other countries equipped me with more global and cross-cultural awareness,” she said. “What I learned at Longwood made me want to teach, and my experience helped me develop myself in a way that contributed to that increasing awareness.”

Prior to the Enough Project, Prow worked at the National Democratic Institute, Health Care Without Harm and Friends of the Earth in central roles to align policy, practice and programs, and before that advanced academic, cross-cultural and operational goals as academic director of the School for International Training’s Madagascar study abroad program. She began her career as a public high school teacher in Smithfield in 1988.

“This work makes me so grateful. I’m lucky that I have the strength and opportunity to do it,” she said.