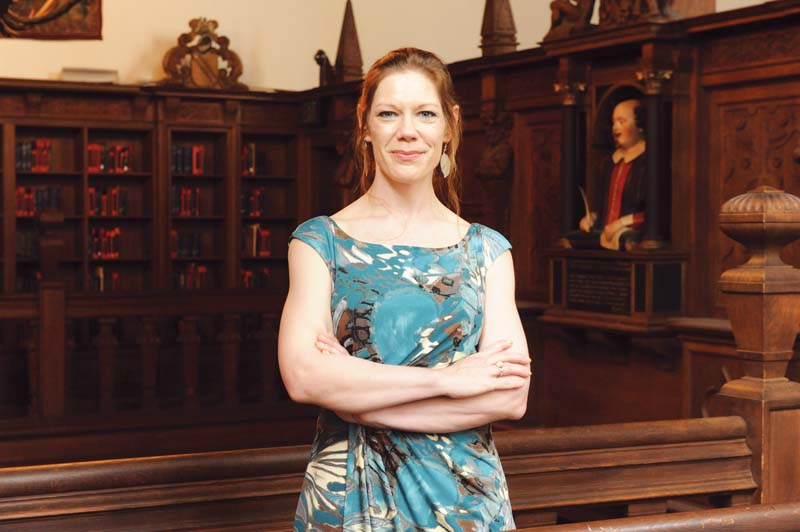 Ever since she can remember, Melissa Ridley Elmes, M.A. ’09, has been fascinated with medieval literature and culture.

Initially, she was attracted to the 19th-century romantic ideas of chivalry and heroics embroidered onto the era. Later, through course work in medieval literature and history, she grew to appreciate a more realistic picture of the Middle Ages, with its gothic arches and harsh realities.

Now a doctoral candidate in medieval literature at the University of North Carolina at Greensboro, Elmes is writing her thesis on feasts and feasting in medieval British texts.

For her, a day well spent includes hours of uninterrupted research. So naturally she was delighted to be selected earlier this year to participate in a 10-week seminar at the Folger Institute, a dedicated center for collections focused research and advanced study in the humanities located at the Folger Shakespeare Library in Washington, D.C.

Titled “The Scale of Catastrophe: Ecology and Transition, Medieval to Early Modern,” the seminar, led by renowned medieval scholar Dr. Jeffrey Jerome Cohen, paired medieval texts depicting survival in the face of disasters like the great flood with early modern ones that carry the stories they offer into new realms, Elmes said. “Throughout the seminar, we had complete access to the collection from the Folger’s archives. It was extraordinary.”

Located a block from the U.S. Capitol, the Folger Library houses the world’s largest Shakespeare collection and major collections of other rare Renaissance and medieval books, manuscripts and works of art. “The Folger is a working library, endowed with the intention to be used,” said Elmes. “Unlike most special collections, you’re not required to wear gloves or have someone looking over your shoulder making sure that you don’t write in the books.”

Among the incredible materials Elmes handled throughout the seminar were Reformation-period illustrated Bibles; a 15th-century hunting manual that a 19th-century owner bound in deer hide; hand-painted maps from the 17th century; and letters, pamphlets and plague accounts listing deaths.

“When something horrible happened like the great fire of Northampton, they’d put out an inexpensive pamphlet for the masses dramatically describing the deaths and damage with religious sermons sprinkled throughout,” she said. “Looking at this yellowed page that was written when these disasters happened
and imagining how terrified those people were is a visceral experience. It makes it so much more immediate.”

Medieval history continues to hold the interest of people today, she said, pointing to the popularity of the Game of Thrones books and the television show based on them.

“The Game of Thrones books are indebted to medieval history and documents. Those dinners where people were hacked to death really happened,” she said, giving the Blood Feast of Roskilde in 1157 and the Black Dinner in 1440 as examples.

Folger Institute seminar participants are selected by a faculty committee, said Dr. Owen Williams, assistant director for scholarly programs at the institute. “They must be engaged with the topic but also bring something more to the table. The discussion is pitched at a very high level, and Melissa was a valued addition. With her polish and scholarly background, she excelled.”

A Williamsburg native, Elmes began her college career at Longwood. After two years, she transferred to William & Mary to study classics, foreign languages and education, and graduated with a degree in French and secondary education. After several years of teaching high school in Virginia, she once again heard
the call of Chaucer and went back to school, ultimately receiving a master’s degree in medieval literature from Longwood in 2009.

At Longwood, said Elmes, Professor Larissa Kat” Tracy brought her back full circle: She was so passionate and knowledgeable. She opened things up in medieval studies for me. I’d dreamt of being a professor, but I had been discouraged by people who said I’d never get a job. Professor Tracy said I could do it—she gave me the shot of courage that I needed to pursue my dream. The training I received in her classes made it possible for me to be the kind of scholar who can do this work.”—Patrick Folliard