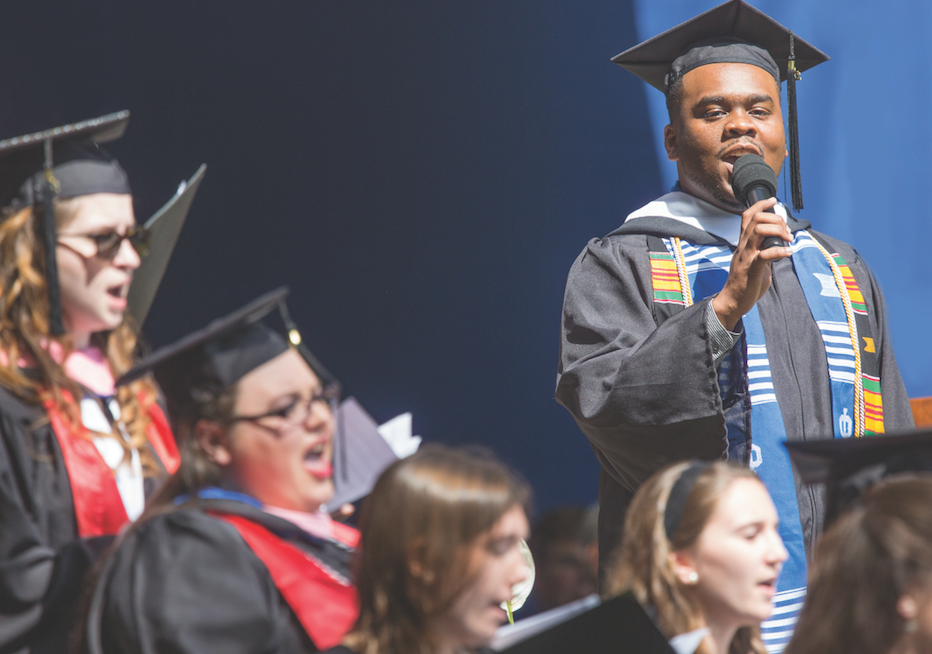 Steven J. Brown ’16, a music major from Java, was part of the choral group that
performed ‘The Road Home’ during the ceremony. 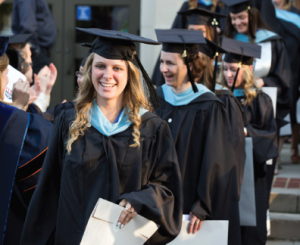 Alyssa Cardwell, M.Ed. ’16, is all smiles after receiving her graduate degree in reading, literacy and learning.

Even though this year’s undergraduate commencement opened with “Pomp and Circumstance” and closed with the “Alma Mater,” it sounded different from ceremonies of the past quarter-century.

Dr. Christopher Swanson, associate professor of music, called out the name of each graduate crossing the stage May 14, replacing now-retired Dr. Bob Webber, who for many years was the voice of Longwood graduation. Another new sound was a performance by 18 students, most of them seniors, who put their voices together to perform the appropriately titled choral work, “The Road Home.”

Dan Balz, chief correspondent for the Washington Post, added his voice to the choir” with a keynote address that praised Longwood 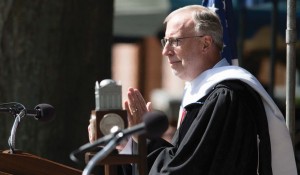 Dan Balz of The Washington Post delivered the keynote address.

for “providing a public service” by agreeing to host the U.S. Vice Presidential Debate in October. That debate should be far more civil than the often rancorous debates of the primaries, he said.

“Instead of being exercises in insults and personal accusations, general election debates are spirited but civil in tone, with the express purpose of providing voters with a better understanding of the candidates,” said Balz, who was awarded an honorary Doctor of Humane Letters.

Despite a long period of soggy weather preceding the ceremony, picture-perfect blue skies greeted the Class of 2016 on commencement morning. “After 14 days of rain, the clouds have parted for this beautiful sunny weather,” President W. Taylor Reveley IV said to cheers and applause at the beginning of the ceremony. 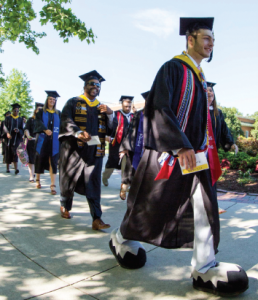 Gibson Hawk ’16, a biology major fromArlington, reveals his identity as one of the students who filled Elwood’s shoes as Longwood’s mascot during the 2015-16 year.

Longwood awarded 940 bachelor’s degrees May 14 and 184 master’s degrees the previous evening. Graduate commencement speaker was Suzy Szasz Palmer, dean of Longwood’s Greenwood Library, who retired June 30. “Have a passion for life,” she told the graduates. “Learn how to have fun. Whatever you do, be it work or play, give 100 percent. Your whole life will be richer for it. And so will the world.”