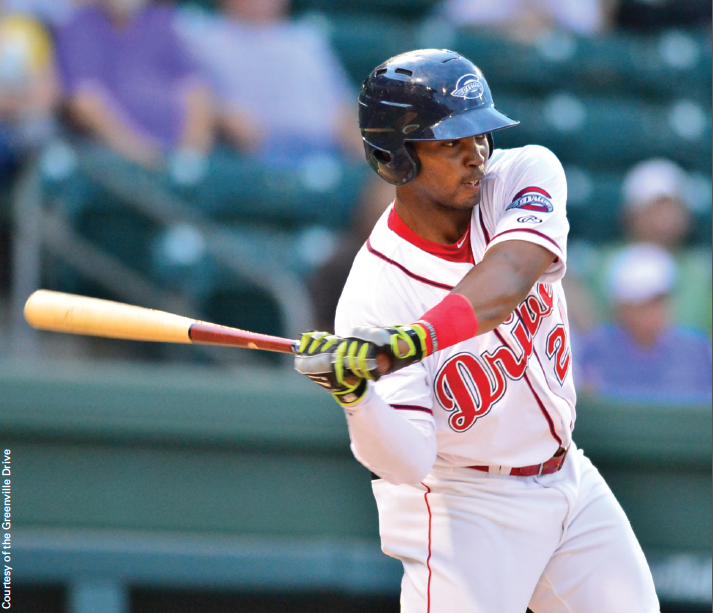 Former Longwood baseball star Kyri Washington, part of the Boston Red Sox organization, is among the top sluggers in the South Atlantic League.

Three former Longwood baseball players are inching closer to the big leagues this summer. Former Lancer aces Mark Montgomery and Aaron Myers ’16 and outfield slugger Kyri Washington are representing Longwood at various levels of professional baseball, and all three have found major success since making the jump to the next level.

Montgomery, a 2011 MLB Draft pick in the New York Yankees organization, has sat on the cusp of the majors for the past four seasons. The hard-throwing right-hander has bounced between Double-A and Triple-A since 2014 and is off to a dominant start in his sixth professional season, working as a high-leverage reliever for the Yankees’ Triple-A affiliate in Scranton Wilkes-Barre, Pennsylvania. Through his first 16.0 innings after getting called up to the Rail Riders in May, Montgomery posted a 3.38 ERA, 21 strikeouts and two saves while issuing just five walks.

Washington, drafted in the 23rd round of the 2015 draft by the Boston Red Sox, has put on quite an encore to his rookie season.

The former Big South home run leader is among the top power threats in the Single-A South Atlantic League, hitting .289 with 28 extra-base hits—including 11 homers— through his first 51 games for the Greenville Drive. His 50 RBI and .563 slugging percentage led the South Atlantic League through the beginning of July despite sitting on the disabled list for seven days in May.

Myers opened his sophomore season in the Milwaukee Brewers organization at extended spring training and made his 2016 debut for the Arizona League Brewers in June. The Lancers’ all-time strikeouts and saves leader fired two innings of one-hit ball for the rookie-league affiliate and holds a 3.60 ERA through his first 5.0 innings this season. His breakout rookie season, in which he did not issue a single walk, came after he signed with the Brewers as an undrafted free agent following a historic four-year campaign as a Lancer.