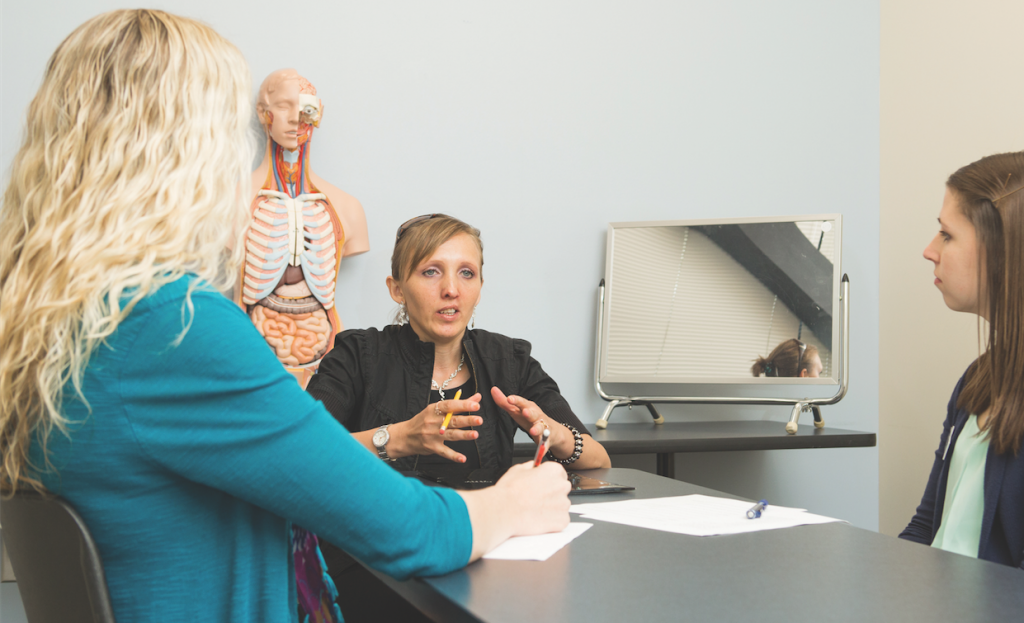 One of the slang expressions that Natasha Paramanova learned at Longwood’s Speech, Hearing and Learning Services (SHLS) this spring, and really likes, is “keep your chin up.” Thanks to her time there, she is doing more of that these days.

Paramanova, a native of Kazakhstan who lives in the city of Taraz, worked with communication sciences and disorders graduate students and faculty for 15 weeks to improve her speech after cleft palate surgery. The therapy, which was provided at no cost, not only helped her speak more clearly but also boosted her self-confidence.

“It was a joy to see Natasha’s self-confidence blossom,” said Dr. Lissa Power-deFur, SHLS director, one of two faculty members in the graduate communication sciences and disorders program who supervised the work by four graduate students in that program.

“We were grateful to be able to offer this service that was not available in the Richmond area,” said Power-deFur. “We all saw an amazing transformation in this young woman. It also was a joy to see our students grow in their clinical skills, in their ability to analyze Natasha’s speech and to make decisions about steps they had to take to improve her speech.”

A cleft palate, in which a bone in the roof of the mouth doesn’t close during fetal development, causes problems with speaking clearly as well as difficulties swallowing food and liquids, Power-deFur said.

“We worked with some sound and phonemic differences to improve [Natasha’s] speech intelligibility,” said Moriah Mayhew ’15, M.S. ’17, of Roanoke. “It is common for persons with cleft palate to produce their consonants in the back of the mouth.”

Paramanova had these common errors. Complicating the therapy, however, was the fact many consonants in her native Russian are also made in the back of the mouth. In a bit of detective work, the clinicians had to sort out which consonant productions to correct because they were a result of compensating for her cleft palate and which to leave alone because they were based on her native Russian.

Paramanova first came to the United States, thanks to a missionary in Kazakhstan, to resolve another health issue. Surgery for scoliosis—so severe that it was compressing her internal organs—was performed in October 2014, also at Chippenham Hospital. Both surgeries at Chippenham were provided pro bono.

“The severity of Natasha’s scoliosis limited her lung capacity, so she did not have the respiratory support she needed for speech. So we had to work on some respiratory activities,” said Kelley Chaney, M.S. ’17, of Chesterfield.

The other students who worked with Paramanova were Erin Weisenberger, M.S. ’19, of Yorktown, and Kelsey Dunbar ’15, M.S. ’17, of Highland, Md. Dr. Kellyn Hall, associate professor of communication sciences and disorders, joined Power-deFur in supervising the students.

Paramanova returned to Kazakhstan in early July after two years in the U.S.

At the SHLS in April, Paramanova was asked how she likes Longwood. “It’s awesome. I like this place. It’s perfect,” she said with a smile.