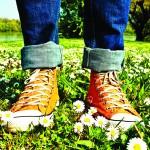 The play’s the thing

The major focus of this course, taught every other spring, is a play—in German—that is produced at the end of the semester. Participation is mandatory for every student. “Putting on a play makes them better German speakers, and it’s more fun than phonetics,” said Martz.

A whisper of scandal

This spring’s play was Spring Awakening (Frühlings Erwachen), a black comedy about teenage sexuality written in 1891 and, at that time, considered “scandalous due to its racy plot,” said Martz. In 2006, the play was turned into a Tony Award-winning rock musical; the performance this spring at Longwood was likewise performed in a modern context. Other plays previously performed as part of German 402 were Faust and The Affairs of Anatol.

Because the “actors” speak German but the audience doesn’t, written summaries of each scene are provided. “I tell the students to do a good job, to speak loudly and clearly, but remind them that probably 80 percent of the audience won’t know what they’re saying,” said Martz, who, with help from the students, edits the script to accommodate time constraints and students’ speaking abilities.

Not a dry eye in the house

“Students have a good time with it, and it brings their friends and sometimes their parents out. We’ve had grandparents, too,” said Martz. “After Faust, I talked to a mother who was so proud of her daughter that she was in tears. This raises the profile of modern languages and is just good for the Longwood community. It’s a fun class to teach.”

Spring Awakening: A Play by Frank Wedekind, translated by Jonathan Franzen, published by Faber & Faber in 2007