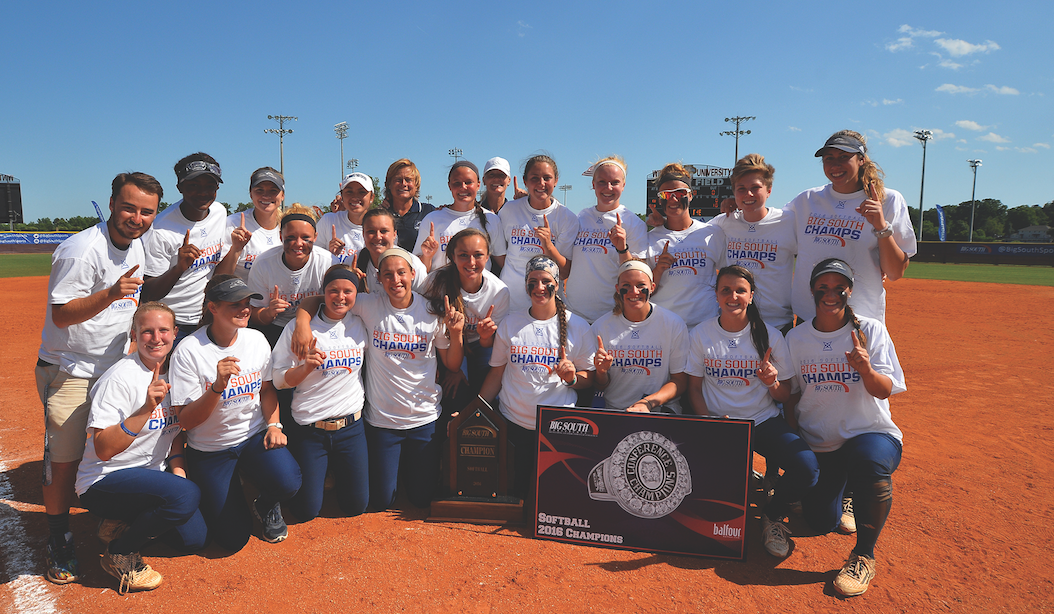 The softball team celebrates its third Big South Conference title before going on to the NCAA Tournament, where it reached the regional championship game.—Photo credit: Tim Cowie

May 2016 was a month for the record books, but the stats weren’t just about Longwood softball’s winning its third Big South Championship and advancing to the NCAA Regional Championship for the first time in program history.

Numbers generated that month also told the story of record-breaking traffic on the athletics website and engagement via social media—all part of an avalanche of attention focused on Longwood that was brought on by the softball team’s postseason success.

So, while the softball team was building up to its third 40-win season in four years through the Big South Championship tournament and NCAA regionals, people were flocking to the athletics Facebook page, resulting in an organic reach of more than 34,000 people per day from May 14-23.

Freshman Sydney Gay pitched a remarkable string of shutout innings in the Big South Tournament, and the Facebook post after the final victory had 199 shares and 400 likes. And sophomore Karleigh Donovan’s spectacular .500 average in the NCAA regional series contributed to record-breaking single-day numbers for most users and most page views on LongwoodLancers.com the day of the Regional Championship game.

Head coach Kathy Riley’s program has become the prime example of the benefits high-level athletics success brings to a university. If the role of Longwood athletics is to enhance national exposure for the institution, excite the university community and provide a unique opportunity for a large population of Longwood students, then Longwood softball achieved all three of those goals in May. The team also won some pretty big games.

On the way to their second-straight Big South Conference Championship trophy, the Lancers beat Winthrop, Presbyterian and Coastal Carolina, clinching the title with a win over Campbell on May 14. Then they packed up their winning ways and took them to the NCAA Regionals in Harrisonburg, where they defeated Princeton and No. 2 seed University of North Carolina in back-to-back victories on a Saturday that will go down as the biggest day in the history of Division I Longwood athletics.

The dream ended with a loss to powerhouse James Madison in the NCAA Regional Championship game May 22, but the benefits of Longwood’s postseason run have extended far beyond the diamond.

Softball’s success has placed the university’s moniker on ESPN and yielded special coverage on various regional media outlets in the commonwealth and beyond. Longwood fans came in droves to Harrisonburg to cheer on the Lancers, outdrawing ACC powerhouse North Carolina as Longwood knocked off the Tar Heels in upset fashion.

The buzz and publicity generated by the Lancers in the two-week postseason is just the beginning. While Longwood softball is now an established dynasty, Longwood’s 13 other varsity programs continue to make their climb as well, including a baseball program that just pulled off its first 30-win season of the Division I era, tied for second place in the Big South and reached the Big South semifinals.

As Longwood heads into its 10th year as a Division I institution, softball’s sustained success has laid the foundation for the institution’s Division I success. Now it’s time to build.