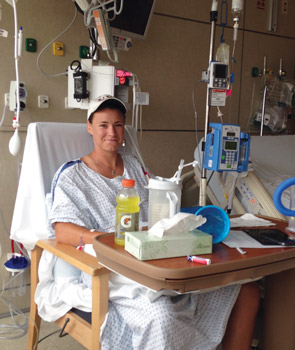 Heather Monger ’14 has plans to one day become a physician, but she decided not to wait until then to start helping people and saving lives.

In June 2015, Monger became the first nondirected liver donor for the University of Virginia Health System. That means she was willing to undergo major surgery to donate a lobe of her own healthy liver to someone she didn’t know.

If you find that selfless act hard to believe, you are not alone. The medical staff at UVA weren’t entirely sure how to handle the offer either.

“It had to be approved by the transplant and ethics board,” said Monger with a slight chuckle. “They asked why a 22- year-old, healthy grad student would want to volunteer for major surgery.”

The answer goes back to a tragedy in Heather’s family three years earlier. Her brother Matt, who long suffered from epilepsy, died suddenly. When the family was forced to address the question of donating his organs, they became aware of an issue they had never before considered.

“When I learned how many people die waiting for a transplant, it was eye-opening,” said Monger. (According to the American Transplant Foundation, more than 120,000 people in the U.S. are currently on the waiting list.) “It didn’t take away from the loss of my brother, but it did help knowing he had saved so many lives.”

It wasn’t long before Monger, then a kinesiology major at Longwood studying exercise science, decided to do a little legwork of her own. She donated blood and bone marrow, and, after a little research, became committed to one day donating a kidney or part of her liver.

“When Matt died, it was such a feeling of helplessness,” said Monger. “I wanted to help a family so they might not have to experience a loss like we did.”

“Living donation is a selfless and heroic act,” said Melissa Donovan, the living liver donor coordinator for the University of Virginia Health System. “We are so grateful for individuals like Heather, who have graciously provided life for those in need.”

“If it were your loved one, you’d want someone to step up. ”Monger said. Unlike other organs in the body, a healthy liver can regenerate. In the case of a living donor transplant, the donor’s liver can restore itself to original size and the transplanted portion grows to a comparable size in the recipient in about 12 weeks.

“It was amazing how quickly I recovered,” said Monger. “It’s not something for everyone, but it was certainly one of the best learning experiences of my life.”

Monger is currently in the graduate program for exercise physiology at the University of Virginia.