With the waters of the Chesapeake Bay gently white-capping around them, a group of Longwood students bellied up to the ferry’s deck rail, binoculars in hand. They surveyed the waterscape, excited about reaching Tangier Island, a tiny, isolated spot of land populated primarily by crab fishermen whose families have lived there for generations. 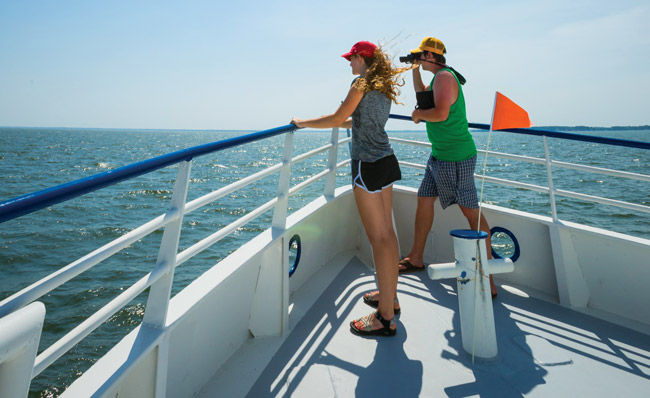 This day’s lesson—the importance of protecting the island, often referred to as the soft-shell crab capital of the world, both for the fishermen and the wildlife—was just one of many provided in SOLSTICE, Longwood’s summer interdisciplinary program for future teachers focused on environmental issues related to the Chesapeake Bay. Included in the curriculum is a week in residence at the university’s Hull Springs Farm, an invaluable learning laboratory on the nearby Northern Neck. 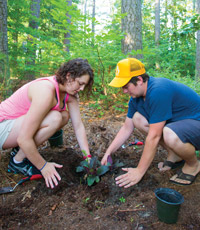 “It was interesting to see how the people and the environment in this isolated community come together to form the whole picture,” said Andrew Gibson ’18, a liberal studies major from Crozet, of his day on Tangier Island. While there, student scoured the island to interview local residents, testing their skills at navigating the narrow streets in the island’s ubiquitous golf carts.

“SOLSTICE breaks down classroom walls and allows students to get their feet in the water, figuratively as well as literally, rather than just reading about things in a book,” said Dr. Patricia Lust, who returned to the music faculty this summer after serving as director of the liberal studies program, which runs SOLSTICE, since 2009. “The three most important features of the program are environmental awareness, engaging students as citizen leaders and using place as text.”

Courses in the program, whose name is an acronym for Summer of Learning: Students and Teachers Investigating the Chesapeake Environment, have primarily been in science and English. The program also involves online work.

A key component of the curriculum is the required residency at Hull Springs, a 662-acre waterfront lab in Westmoreland County that Longwood uses for education and research. Hull Springs—located on the point where two tidal creeks form the Lower Machodoc Creek, which flows into the Potomac River not far away—not only provides access to a wealth of enterprises and resources related to the local environment and economy but also offers opportunities for students to fish, canoe and learn about Hull Springs’ award winning living shoreline. 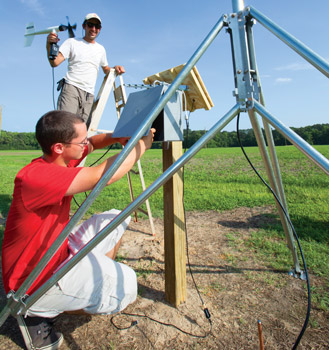 This summer, SOLSTICE collaborated on two new projects at Hull Springs that will be used by students. In a joint effort with the Department of Biological and Environmental Sciences, an environmental data-collecting system, the Longwood Environmental Observatory, was installed, allowing weather, water and soil data to be collected at three stations and transmitted to the Longwood campus every 15 minutes. The second project, in conjunction with the campus’ student chapter of the Wildlife Society, was the completion of the first phase of a “forest garden,” a demonstration garden featuring plants native to the area.

In its entirety, SOLSTICE opens students’ eyes to a broad range of issues the students may never before have considered.

“It was invaluable to see the whole picture,” said Gibson, the student from Crozet, who plans to teach natural science and social studies in middle school. “By going to the [commercial fishing] factories and talking with the fishermen, and listening to other speakers, I got a broad perspective that goes beyond the classroom.

“I have lived in Virginia all of my life but had no idea about all of these issues affecting the Chesapeake Bay,” he said. “I learned that once you harm one aspect of the bay, it affects other areas as well. Blue crabs and oysters have especially been affected.” 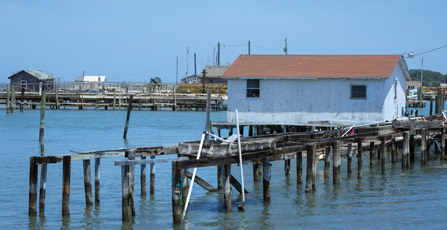 Crab shacks are a common sight on Tangier Island, often called the soft-shell crab capital of the world.

One site the students visited was the Omega Protein plant in Reedville, where menhaden caught nearby are processed into many products, including fish oil dietary supplements and animal feed. The site is the largest facility of its kind on the East Coast and the second-largest fishery in the United States. Students also toured an oyster shucking facility, an oyster nursery, the Reedville Fishermen’s Museum and an aquaculture facility operated jointly by two seafood companies.

“The students primarily investigated issues related to menhaden, oysters, blue crabs and striped bass, which are keystone species of the Chesapeake Bay,” said Dr. Mark Fink, associate professor of biology and chair of the Department of Biological and Environmental Sciences, who taught in the program this summer. Each species is important not only to the economy but also to the ecology of the bay. Menhaden— a small, deep-bodied fish in the herring family—are so important to Virginia’s economy that their management is controlled by the House of Delegates. 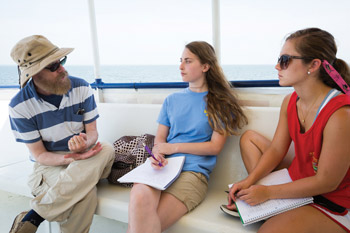 “We also want students to think about the broader environmental issues facing the bay and to be exposed to a wide range of perspectives, which sometimes conflict,” he said. “There are no immediate solutions to these issues, and our goal is for these young professionals to bring this type of critical inquiry to their own future classrooms and work environments.”

“As citizen leaders, students will confront conflicting data all the time, and they will have to make sense of it, which is what this program is all about,” said Dr. Alix Fink, the Marc Boyd Sharp and Wilma Register Sharp Dean of the Cormier Honors College for Citizen Scholars, who has been involved in SOLSTICE since it began in 2011.

“We know that engaging students in learning science through immersion in complex issues of civic importance is a high-impact practice in higher education,” said Fink, also an associate professor of biology. “Students explore an incredibly important and complicated conservation challenge in our backyard, the Chesapeake Bay, and learn key science content while being involved as citizen leaders. We’re preparing students to evaluate important issues and consider the ways in which science can and cannot help us to address them.”

The program has attracted favorable attention from off campus. 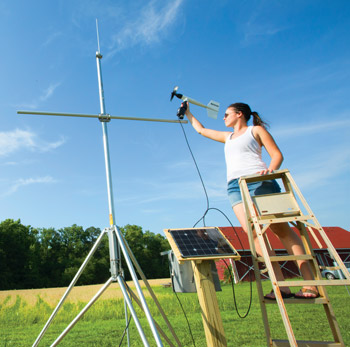 David Burns, executive director of the National Center for Science and Civic Engagement, said the “excellent work by Longwood faculty, students and community partners to prepare future teachers will ensure that the Chesapeake Bay remains the economically vital national treasure that it is.”

Angela Neilan, a former community involvement specialist with the Virginia Department of Environmental Quality and a SOLSTICE speaker this year, said the program’s curriculum guides students in their inquiry about important issues and gives them opportunities to talk directly to the citizens. “It’s a wonderful example of teaching students to listen and discover the concerns of the community, focus on priorities and develop realistic solutions,” she said.

Clarissa Miller ’15, a liberal studies major from Virginia Beach who will graduate in December, cut right to the bottom line when asked about SOLSTICE.

“The program enabled me to get out of my comfort zone and experience things I wouldn’t have experienced otherwise,” she said.