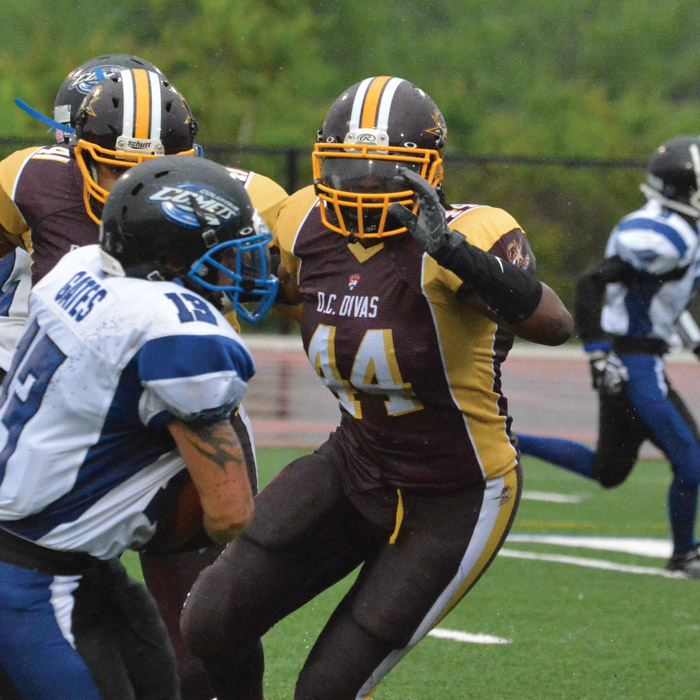 Tia Watkins ’04 helped the D.C. Divas to the 2015 WFA National Championship, the equivalent of the Super Bowl for women’s professional football, and earned WFA National Conference Defensive Player of the Year honors.

Longwood does not have a strong history of football greatness, or any history for that matter. However, one former Lancer is trying to change that.

Checking in at 5-foot-9 and 185 pounds, Longwood’s lone football standout is a strong, athletic outside linebacker who doesn’t so much man” the line of scrimmage as she does woman” it.

Her name is Tia Watkins ’04, and she’s giving new meaning to the phrase “hits like a girl.”

“We play in full uniform, full pads and helmets, and we tackle just like the guys,” said Watkins, a member of the D.C. Divas, one of 40 teams that make up the Women’s Football Alliance (WFA), the nation’s largest women’s professional tackle football league. A former two-sport athlete at Longwood in basketball and lacrosse, the 34-year-old mother of two began playing football professionally in 2013. Since then, she has made a rapid ascent from rookie to elite defender to WFA National Champion.

“When I first heard there was professional women’s football, I was like, ‘Why am I just finding this out?’ I’m in my 30s now, but can you imagine what I would have been able to do if I had found it right out of college?”

Known as Tia Richardson during her days at Longwood, Watkins is the defensive fulcrum of the Divas. She helped her team to the 2015 WFA National Championship, the equivalent of the Super Bowl for women’s professional football, and earned WFA National Conference Defensive Player of the Year honors.

Watkins’ seamless transition to football should come as little surprise to those familiar with her athletics résumé. She came to Longwood as a basketball player but tried out for the lacrosse team at the urging of Kris Denson ’03, a friend and a member of the team. Watkins not only made the team, she went on to play four years while helping the Lancers to two NCAA Tournaments, a national championship berth in 2002 and a four-year record of 54-7.

For Watkins, playing sports has long been about more than the game itself. She was a regular in pickup basketball games as a child, keeping pace with her male counterparts well into high school. She was even a starting defensive back and reserve running back on her high school football team.

Now, as a woman competing in a male-dominated sport, Watkins sees herself delivering the same hits to gender stereotypes that she dishes out to running backs on game day.

“I’m feminine, but I can be rough and tackle. I don’t have to put myself in a box, ”Watkins said. “My kids and other kids are seeing that you don’t have to fit the stereotype.”

Watkins was featured in a Washington Post article after the Divas’ national championship, bringing even more attention to her athletic ability and to her commitment to serving as a role model for gender equality.

“Now more and more, girls are playing with the boys in football,” she said. “Hopefully, one day it’s not like, ‘You can’t do this because you’re a girl, and only boys play this.’ It’s just a mindset that we shouldn’t limit our daughters. You want to play football? You want to be the CEO of a company? You want to be president? You can do anything you want to do.”