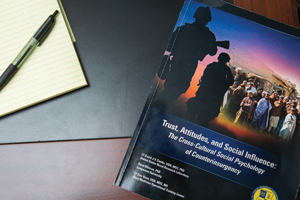 Dr. Sarai Blincoe wants to provide soldiers with what she believes to be the most effective weapon in contemporary warfare: not anM-16 but the ability to win the trust of local civilians.

How U.S. armed forces can leverage psychology to wage successful counterinsurgencies in places like Iraq and Afghanistan is spelled out in a recently published manual co-authored by the Longwood psychology professor. The key to gaining the political support of the local population is understanding and utilizing principles of persuasion, influence and trust, accompanied by cross-cultural awareness, say Blincoe and her co-authors.

“Superior weaponry is no longer enough. In counterinsurgencies, where it’s often unclear who the enemy is, you have to address the mind-set of the people and their behaviors, which are often neglected,” said Blincoe, a social psychologist who has worked as a research analyst for the Navy since 2012.

“We need a different set of tactics and strategies to focus on the local population. If you get the population on your side, you have a much better chance of success. The military is shifting and recognizing this, but many people are unfamiliar with the potential of psychology for these settings. We’re trying to fill that gap.”

Published by the Naval Research Laboratory, the manual, Trust, Attitudes, and Social Influence: The Cross-Cultural Social Psychology of Counterinsurgency, is written as “kind of a supplement” to the Army’s counterinsurgency field manual.

“This is not about live fire situations but about day-to-day stuff, usually how the military deals with civilians,” she said. “You have to be careful that you don’t drive civilians into the arms of the insurgents and turn them into the enemy. A lot of the manual is about changing minds and behavior. These concepts can be applied with fairly minimal resources—and with a high impact for the resources—to any kind of irregular warfare, including counterterrorism.”

This approach, often called “soft power” and known during the Vietnam War as the hearts and minds” campaign, draws from the study of human interaction, called social psychology. As U.S. military commander in Iraq, Gen. David Petraeus was an advocate of this human-oriented” approach, said Blincoe.

The manual will be distributed to members of the Defense and State departments. “I hope this will influence the military’s thinking, and I’d like to see it become part of the curriculum at military schools,” said Blincoe. “The manual does some translating and distills some helpful, practical information. We need improvements in how we apply soft power, and social psychologists can help.”