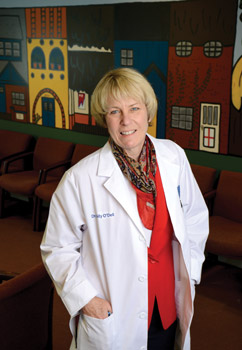 As far as goals go, those of Dr. Molly O’Dell ’76 and her co-workers in the Virginia Department of Health’s New River Health District can’t get much bigger: to make Virginia the healthiest state in the nation. This means looking after everything from birth certificates to septic systems to restaurant cleanliness.

The work that goes into public health—behind the scenes and otherwise— is both wide and deep, and can take decades to come to fruition. “You have to be in it for the long haul,” said O’Dell, who attended the Medical College of Virginia as the first female Longwood graduate to go straight to medical school and the second female grad to become a physician. “I’ve had to learn patience.” She gives as an example the fact that it took from 1987, when she began her public health career, until 2012 to make a dent in teenage pregnancy rates in her district.

The New River Health District serves a population of more than 160,000 people living in Floyd, Giles, Montgomery and Pulaski counties in Southwest Virginia. In 2013, poverty rates in Southwest Virginia were the second-highest in the state, with 18.6 percent of the population living below the poverty line. O’Dell describes public health as “the social justice arm of medicine. It’s all about health equity.” Her days are filled with treating patients, spreading the word about health department services, encouraging good health choices and taking care of the usual tasks that go along with running an organization.

In her spare time, she has pursued a love of poetry. She earned an MFA in poetry from the University of Nebraska in 2008 and published her first book this past spring.

The life she leads today is one quite different from what she had in mind when she stepped onto the Longwood campus. She started out as a pre-nursing student, changing career destinations when a professor suggested she think about becoming a doctor. A class in embryology at Hampden-Sydney sold her on the idea.

She was drawn to Southwest Virginia early in her career and had a private practice in Buchanan. “It was a completely different world,” said O’Dell—the kind of world where she made house calls on Friday mornings and traded medical services for food or having her house painted, “like you hear about people in the 1920s and ’30s. It was the end of that way of practicing medicine.”

Those years form the core of O’Dell’s debut poetry collection, Off the Chart, published in June 2015 with poems about the everyday men and women she tended to, who did or did not want to take the pills they were supposed to take, who did or did not want to stop taking the pills they were not supposed to take, whose lives became intertwined with her own.

Recently, O’Dell has delved into the emerging field of narrative medicine, which aims to teach doctors how to listen to and interpret their patients’ stories in order to treat them more humanely.

“It reaffirms for physicians why they got into medicine in the first place,” she said. “It was to care about people.” O’Dell has contributed on the subject most recently at the Virginia Tech Carillion School of Medicine and Research.