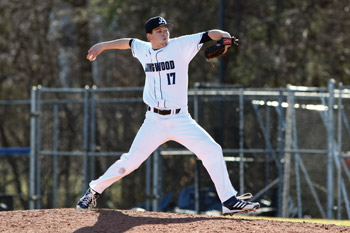 A 6-foot-3, 185-pound native of Fairfax Station, Gould broke out during his second summer collegiate season and earned Valley All-Star honors after posting a 5-0 record with eight saves, a 1.09 ERA, 30 strikeouts and just 12 walks in 24.2 innings for the runner-up Staunton Braves.

Gould was especially dominant in Staunton’s playoff run to the Valley League Championship Series, firing 7.0 innings of one-run ball with 11 strikeouts over three postseason appearances. He capped his summer with two perfect innings of relief in the championship series’ decisive third game, which the Express claimed 4-3 after scoring the go-ahead run prior to Gould’s entry.

Gould enters his junior season at Longwood with 36 collegiate relief appearances, three starts and 74.0 innings under his belt. He logged a 5.45 ERA in 33.0 innings as a sophomore in 2015, striking out 35 while holding the opposition to a .235 batting average. For his career, he has allowed just one home run over 74.0 innings, compared with 80 strikeouts, 49 walks and 66 hits allowed.