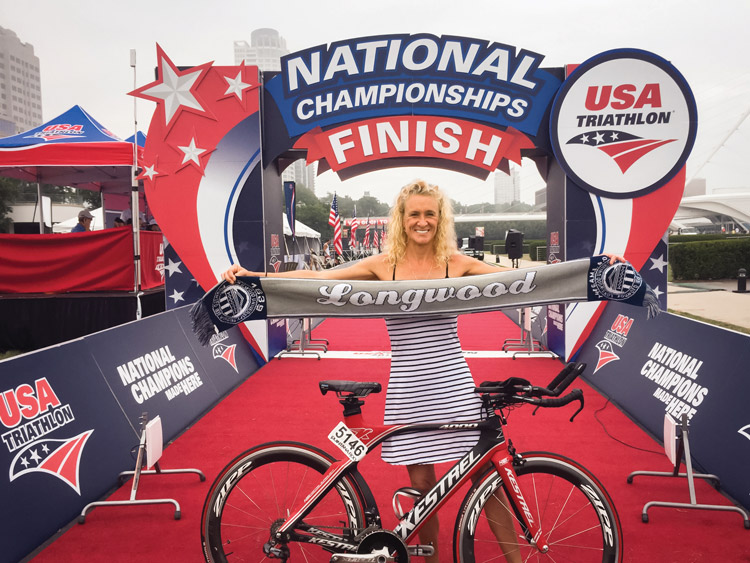 Longwood cross country head coach Catherine Hanson will be traveling to Cozumel, Mexico, in September 2016 to compete for the Team USA Triathlon squad at the Sprint World Championships.

Hanson qualified for the world championships, set for Sept. 11-18, after placing 13th out of 81 entries in the age 45-49 division at the 2015 USA Triathlon Sprint Age Group National Championships earlier this fall. Hanson’s time of 1 hour, 17 minutes, 14.42 seconds put her in the top 30 percent of the field in her age group. Overall, she finished 120th of 977 female competitors and logged the fourth-fastest time of any Virginian at the race.

Hanson’s most recent accolades are a continuation of her journey from cancer survivor to high-level triathlete. LongwoodLancers.com detailed her story last November following her 25th-place finish at the 2014 USA Triathlon National Championships.

“I am extremely thankful for the support Longwood has given toward my efforts, and I hope I made her constituents proud,” said Hanson, who is entering her ninth year coaching Longwood’s men’s and women’s cross country programs.

“This year was said to be the deepest in talent in years, and the very few slots USAT offered on the national team were hard to obtain,” Hanson said. “The improvements I made this year were significant for a sprint distance, especially with the water temperatures dipping to 63 degrees in Milwaukee. “I definitely need more mass open water swim start practice because I struggled to establish my true swim pace while getting kicked and beat up and having to fight through everyone at the start. But like I tell my athletes, part of our successes are the lessons we learn and the mistakes we correct.”