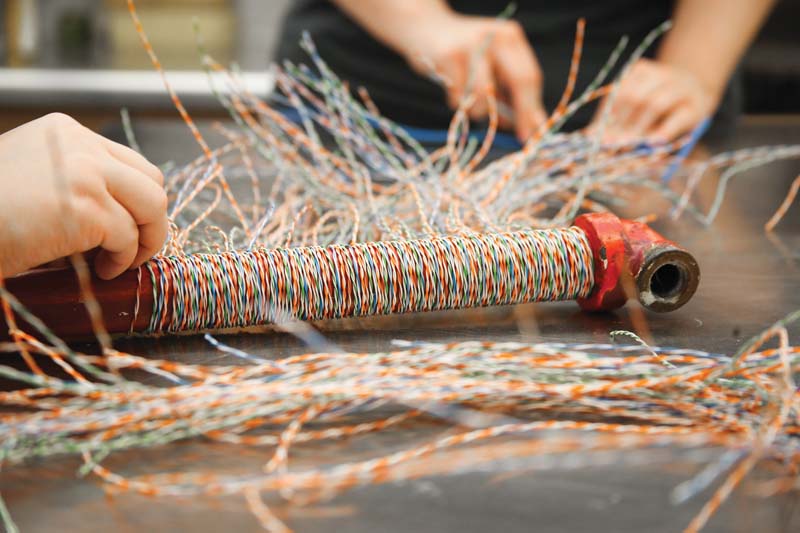 Doorknobs, multicolored wiring and radiator covers aren’t generally on the list of supplies for sculpture classes, but the provenance of these particular items made them especially appealing and inspirational to 14 student artists at Longwood.

The materials were collected from the Cunninghams, the beloved residence hall complex that is making way for the new Upchurch University Center. Students in Art 381 used them and other items from the complex to create five sculptures that will eventually be displayed in the Upchurch Center or in the new Maugans Alumni Center.

The project was an effort to provide art students with a unique challenge while honoring the legacy of the buildings known affectionately as “the ’Hams.” 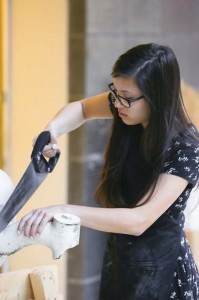 “We want to preserve the memory of the Cunninghams. It’s not the buildings that are really important; it’s the memories,” said Nancy Britton Shelton ’68, associate vice president for alumni relations. “Those memories are related to the times students lived in the Cunninghams. We look forward to the future memories students will build as they use the Upchurch Center.” Reflecting the classic Jeffersonian architecture that characterizes Wheeler Mall, the Upchurch Center will be a handsome addition to the heart of campus.

Taught by Angela Bubash, assistant professor of art, the art students worked in teams on the projects from early October through the end of the semester.

“All of the students felt an emotional attachment to the materials and the work, which made them more motivated,” said Bubash, who stipulated that each group include a student who had lived in the Cunninghams.

I told them, ‘Do a good job because you’re leaving your mark.’ We treated it like a commission.” The final sculptures are a female figure, a horse, a bench, a model of the Cunninghams and a door with an illuminated sink.

“It was an honor to do something that will be in the new [student center] and nice to work with materials from the Cunninghams,” said Amanda Herring ’15, an art major from Charlottesville who lived in the Cunninghams her sophomore year. Her team created the bench, titled “A Seat to Remember.” 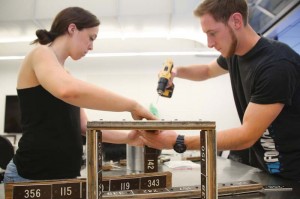 Amanda Herring ’15, of Charlottesville, and Bruce Hylton ’15, of Richmond

Another student who worked on a sculpture, Jillian Ewell ’15, of Williamsburg, has deep connections to Longwood—and to the Cunninghams. Both of her parents, Steve Ewell ’84 and Gray Ann Granger Ewell ’89, are Longwood alumni and so was her great-grandmother, Ruth Abell Hill ’25. An art major, Jill was a Cunninghams resident during her sophomore year, following in the footsteps of her dad, who lived there two years when he was a student.

“I think the sculpture project is fantastic,” said Jill’s mother, Gray Ewell. “What better way to commemorate something that was full of history and stories. People have said, ‘If these walls could only talk….’ The walls can talk, and this is an excellent way to tell their story.”

Kim Bass, a project manager in Longwood’s Capital Design and Construction office, saw to it that the students got the materials they wanted. Three of the sculptures were made from doors. Other materials that were used include an exit sign, keys, number plates, radiator covers, doorknobs, sprinkler pipes and soap dispensers.

The idea for the project came out of a brainstorming session that included Shelton; Courtney Hodges, interim vice president for commonwealth relations; and Paula Clay Prouty ’85, director of advancement services. 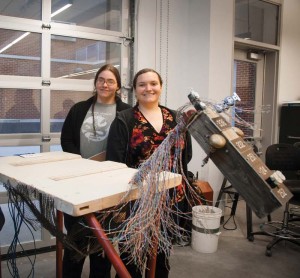 Hodges passed the idea along to Dr. Wayne McWee, interim chair of the Department of Theatre, Art, and Graphic and Animation Design.

“I thought this would be a great educational experience for our students that would connect them with the Cunninghams and the new student center, as well as preserve a little of our history,” said McWee, whose daughter, Andrea McWee Parson ’93, lived in the Cunninghams all of her four years at Longwood and whose son, David McWee ’02, lived there his first two years.

Bubash agreed. “The students learned to work with different materials, and they learned which woods split and when to use a screw rather than a nail. There was a lot of trial and error. With each step, we had a new set of problems to solve. It was cool that many of them used tools they were initially afraid of, and it was fun to see them getting physical with the work. It was kind of exhausting but fun.”