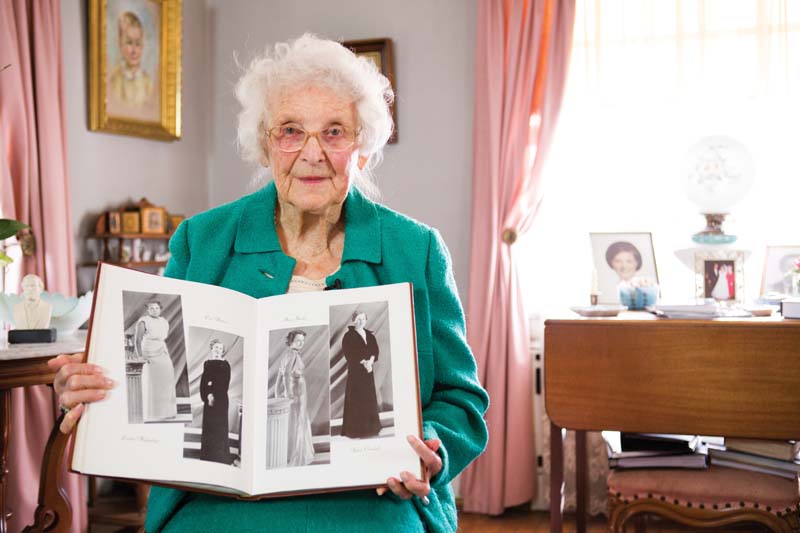 Agnes Crockett Davis ’36 shares her senior portrait as published in the 1936 Virginian. She celebrated her
100th birthday on Jan. 18, 2014. In the yearbook she’s holding, her photo is on the far right.

The 100th birthday of Agnes Crockett Davis ’36 on Jan. 18, 2014, was celebrated with the release of a Longwood-produced video in which she reminisced about her student days.

“To tell you the truth, when I first went to Longwood I was so homesick I didn’t know what to do,” Davis says as the video begins. And many times I would pack my trunk and say, ‘I’m going home.’ But then I felt like, with all the lovely things that had happened to me there on the college grounds and the teachers, I couldn’t do it. So I decided I will never leave the campus until I graduate.”

The video was created by Andrea Dailey, director of multimedia/senior photographer, who, along with university photographer Mike Kropf ’14, visited Davis at her home in the Fort Chiswell area of Wythe County a month before her birthday. Davis’ daughter, Susan Davis Goforth ’68, who lives a few miles away in Max Meadows, was present for the interview.

“Mother’s mind is still sharp, and she had open-heart surgery at 90,” said Goforth.

Davis, who grew up in the Crockett’s Cove area of Wythe County, taught for a few years at Robert E. Lee High School in Staunton after graduating from Longwood, then returned home, got married and started a family.

She lives on the horse farm that the family has operated for decades. She and her husband, Garnett Davis, who died in 1976, bred and trained American Saddlebred horses, which they began showing in 1955. She currently has about 90 horses.