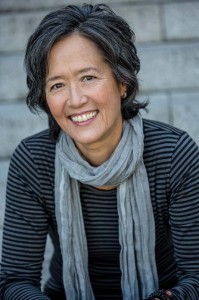 Novelist and filmmaker Ruth Ozeki will be awarded the 33rd John Dos Passos Prize for Literature at Longwood in April.

“She is a writer who brings us perspectives we often fail to recognize in American literature,” said Dr. David Magill, associate professor of English at Longwood and chair of the Dos Passos Prize committee. “She explores the boundaries between different identities, Japanese and American, and her writing offers us insight on how such cultures can intersect and at times conflict with one another.”

Ozeki, who is of Japanese-American heritage, is a Zen Buddhist priest who has traveled and worked extensively in Asia.

She started her career as a filmmaker, receiving accolades for her autobiographical film “Halving the Bones,” which was screened at the Sundance Film Festival and Museum of Modern Art.

Her first two novels, My Year of Meats and All Over Creation, were critically acclaimed and translated into 11 languages. Her most recent work, A Tale for the Time Being, was shortlisted for the prestigious Man Booker Prize and the National Book Critics Circle Award, and won the L.A. Times Book Prize and Medici Book Club Prize. A Tale for the Time Being is the story of a mysterious diary that washes up on a Pacific Coast beach after the 2011 Japanese tsunami. The diary is discovered by a girl named Ruth, who becomes obsessed with discovering the diary owner’s fate.

Ozeki will read from her work and be awarded the Dos Passos Prize in an April 24 ceremony on campus. The public is invited to attend.

Recipients are American creative writers who have produced a substantial body of published work that displays characteristics of Dos Passos’ writing: an intense and original exploration of specifically American themes, an experimental approach to form and an interest in a wide range of human experiences.