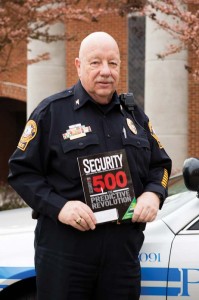 The Longwood University Police Department (LUPD) is ranked 16th in the nation among colleges and universities in the annual evaluation of the security industry by Security Magazine. Longwood is the only Virginia college or university in the 21 higher education institutions on the list, which also includes Duke and Johns Hopkins universities and the University of Chicago.

This is the sixth consecutive year LUPD has been recognized as the one of the top 500 security operations in the nation.

“The work of the men and women who make up the LUPD has raised the organization to this level, and they have made the Longwood community a safer place,” said Bob Beach, Longwood’s police chief.

Beach also credited the university’s administration and Dr. Tim Pierson, vice president for student affairs, in particular, for their commitment and support. Dr. Pierson’s innovation and willingness to support change have been significant keys to our success.”