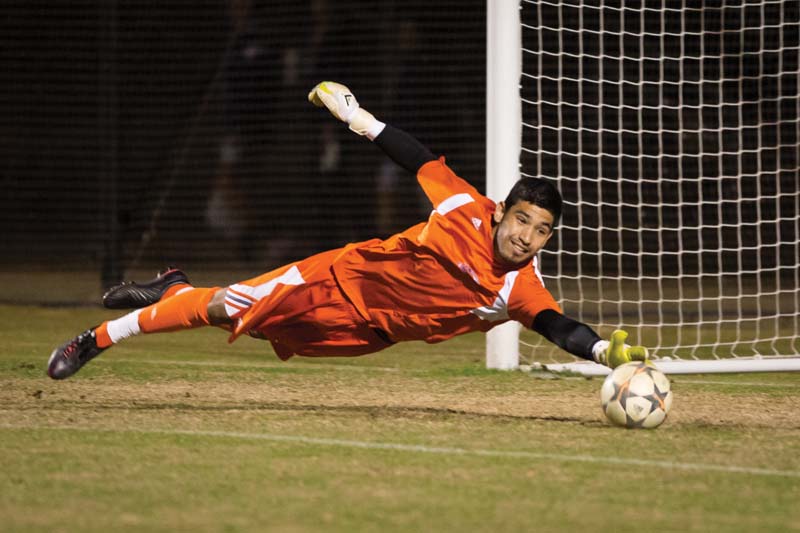 As goalkeeper, Carlos Canas ’17 anchored the Salvadoran squad at CONCACAF,
one of six qualifying tournaments for the U-20 World Cup.

Carlos Canas got a late start to his semester. When his fellow Longwood students returned to campus in January to start their second round of classes, Canas ’17, a criminal justice major from Manassas, wasn’t among them. In fact, he wasn’t even in the same country.

Instead Canas was pursuing a once-in-a-lifetime opportunity to play soccer for the El Salvador U-20 National Team at the CONCACAF U-20 Championship in Jamaica. The CONCACAF (Confederation of North, Central American and Caribbean Association Football) U-20 Championship is one of six qualifying tournaments that
send their winners and a handful of other qualifiers to the U-20 World Cup, which takes place this summer in
New Zealand.

Canas, who started in goal for Longwood as a freshman and sophomore, anchored the Salvadoran squad in the same capacity at CONCACAF. He helped the club to a 2-2-2 record with wins over Canada (3-2) and Cuba (2-0) and draws against Honduras (2-2) and Haiti (1-1). However, it was a 2-0 loss to Team USA in the final match that knocked Canas and El Salvador squad off the docket for a trip to the World Cup.

Canas was a star in the tournament, surrendering just 1.60 goals per game in six matches against a stacked field that included powerhouses from the United States, Mexico and Honduras. It was the second international stint for the Canas, who began his tenure with the El Salvadorian squad last summer.

“Words can’t describe the feeling I get when I play for my country,” said Canas, whose father is a native Salvadoran. “Every game, I was reminded of my responsibility not only to myself, but to my country.”