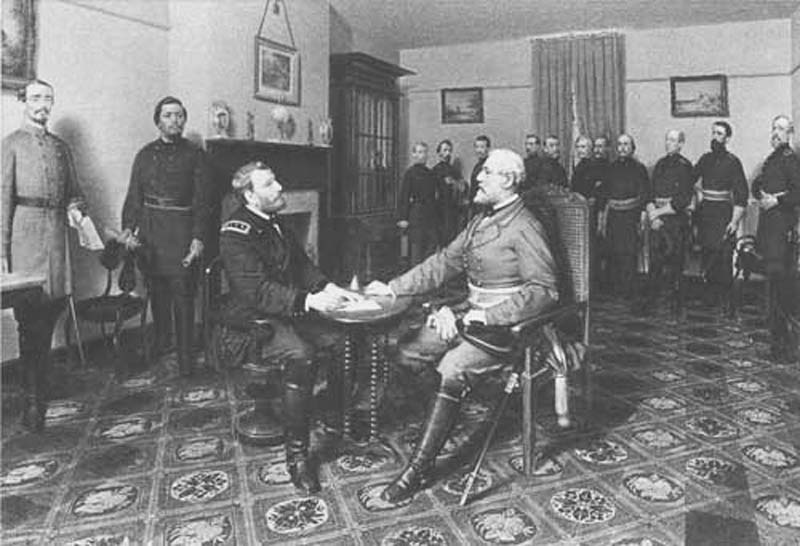 One hundred fifty years ago this spring, the civil war that nearly ripped this nation apart was nearing its end. More than half a million men were dead, and, beyond that carnage, the adolescent United States of America had suffered wounds as a country that, in some cases, continue to fester in 2015.

Because some of the most important final scenes of the war played out in Farmville, near what is now Longwood University, it seems appropriate for us to ponder the consequences of this cataclysmic conflict.

On the morning of April 7, 1865, Robert E. Lee and his exhausted Confederate army entered Farmville after marching all night from the battlefield at Sailor’s Creek. The ravenous soldiers hoped to grab provisions from a supply train waiting near the north end of town. While his men began to procure their rations, Lee moved up the hill to Beech Street, just a couple of blocks from our campus. At the Patrick Jackson home at 304 Beech Street,

Lee held a quick meeting with two of his generals and Secretary of War John C. Breckenridge. He then crossed the street to 309 Beech Street where he visited with the widow of Confederate officer John Thornton. (The home at 309 Beech now belongs to Abbey O’Connor, assistant dean in Longwood’s College of Business and Economics, and her husband, Jerry.)

Lee’s social visits were cut short as the Union army came streaming over the ridge to the east of town. Few of Lee’s men were able to get the food they needed, and, by early afternoon of April 7, Farmville was firmly under Union control. After a brief fight near Cumberland Church just north of town, the Confederates headed west to try to reconnect with their supply trains.

During the night of April 7, Ulysses Grant wrote the first of several notes to Lee requesting that his army surrender. Grant wrote the note from the Prince Edward Hotel, which was then located downtown at the corner of Second Street and Main Street. (The furniture from Grant’s room at the hotel is now at the Longwood Bed and Breakfast on High Street.) Two days later Grant caught up with Lee at Appomattox Court House and the war was effectively over.

To our students, the Civil War might seem like ancient history, but it really wasn’t that long ago. There are people living today who talked to Civil War veterans, and to this day the fabric of our country is interwoven with the ramifications of this immense struggle.

Before 1861, most United States citizens identified more with their state than with their country. Over time, as the nation healed from the war, more people began to proudly call themselves American. The industrial effort that fueled the Union victory was the embryo from which our national industrial engine grew.

It might be hackneyed to say that the war that didn’t kill us made us stronger, but there is no doubt that, 50 years after the war, the United States had grown to be the most powerful and dynamic nation on the planet.

Still, the crucible of the war did not result in a finished product. Recent events in Ferguson, Mo., and elsewhere are painful reminders that the work in bringing our nation together is not finished. It is truly amazing that in the 1950s and 1960s Longwood found itself again in the vicinity of historically significant events. While the Civil War had neared its end on the northern end of our campus, one of the landmark events of the civil rights era took place just south of the university. The student strike at the Robert Russa Moton High School in Farmville became part of the Brown v. Board of Education lawsuit that eventually led to the integration of all public schools in the United States.

It seems very appropriate that in 2014 President W. Taylor Reveley IV announced the intention of Longwood University and the Moton Museum to pursue a mutually beneficial affiliation. In the spring of 1865, students and faculty members on our campus witnessed the end of a war and the beginning of a long journey toward unity and equality. As President Abraham Lincoln stated in his Gettysburg address: “It is for us the living, rather, to be dedicated here to the unfinished work which they who fought here have thus far so nobly advanced.”

One hundred fifty years after the troops passed through Farmville, Longwood students and faculty will join with Moton to continue that journey.