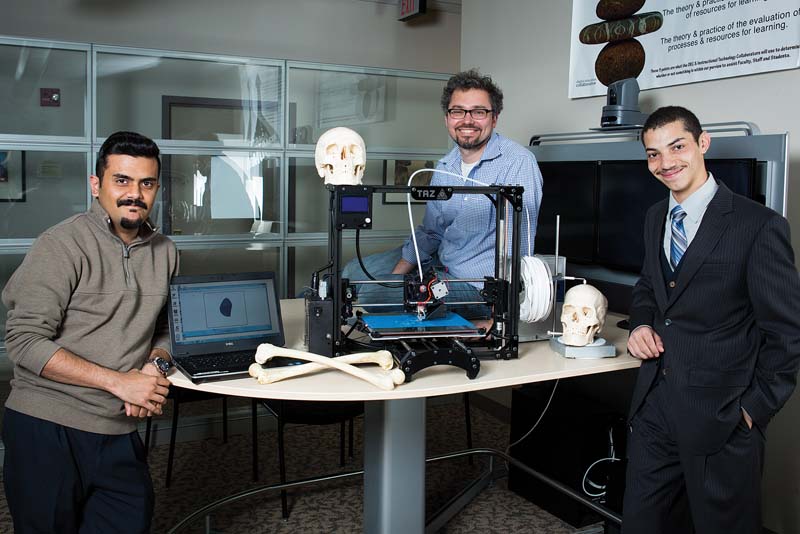 The ability to “print” a 3-D object might have seemed the stuff of science fiction a few years ago, but today 3-D printers can create guns, artificial limbs, smartphones, jewelry and much more. This academic year, a Longwood anthropology major, in collaboration with a biology professor, researched whether this technology can help education and research by replicating human bones.

Amir Mosley ’15, who is interested in studying human remains from archaeological sites, is intrigued by the potential of 3-D printing technology to produce affordable study aids for students in various fields of scientific study, especially archaeology and anatomy. In a research project during the fall 2014 semester, he
tried to scan and print bones and lithic artifacts with a 3-D printer from Longwood’s Digital Education Collaborative (DEC).

Current replicas of human bones are often beyond the price range of many undergraduates and even some schools, said Mosley, who plans to study osteoarchaeology in graduate school. He began his research after discussions with the professor in his anatomy and physiology class, Dr. Björn Ludwar, who told him about the two 3-D printers in the DEC.

“What’s interesting about Amir’s research is that he was taking the knowledge he acquired in archaeology, which is about ancient things, and using it to study the technology of the future,” said Ludwar, assistant professor of biology, who oversaw the project.

The best result was a patella, the small bone in front of the knee, which Mosley was able to not only scan but print.

“Though there was no ‘woo-hoo’ moment, I’m still convinced that 3-D printing can expand knowledge of the human body and humans’ cultural past,” said Mosley, who also tried to scan a clavicle (collarbone), two phalanges (finger bones) and two vertebrae.

When an object is re-created using scanning and 3-D printing technology, a scanner first rotates an object, calculating angles from all sides and making measurements that CAD software combines into a 3-D model. When the design is sent to the printer, plastic filament in the printer is heated up and fed from a spool through a device called an extruder, which, while moving back and forth, deposits thin layers of melted plastic onto a platform.—Kent Booty