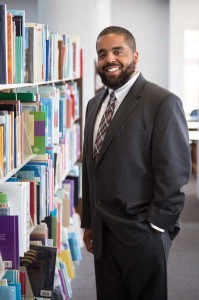 Cedric Hawkes went back to college for his kids.

Hawkes made the decision after his fiancée and the mother of his two sons, then 5 months and 15 months old, died in January 2011. He was 28, had tried college and dropped out, and had worked as a truck driver, restaurant manager and substitute teacher. He was tired of “job hopping” and wanted a career.

“I knew I couldn’t give my kids advice if I were a college dropout. I wanted to be a role model for them,” said Hawkes, a liberal studies major from Crewe who will graduate in December 2015.

Hawkes can be considered a role model for not only his kids—Cedric Jr. “CJ”, now 5, and Bryce, 4—but also for his fellow Longwood classmates. He is a member of the Call Me MISTER program and the recipient of several Longwood University Foundation scholarships. He has a 3.5 grade-point average and recently received a CHI commendation.

“Cedric is a determined and persistent young man who embodies all of the attributes that we look for in Call Me MISTER students,” said Dr. Maurice Carter, who directs Longwood’s chapter of the national teacher leadership program. “As the eldest MISTER, he is an excellent role model to the younger ones.”

“Raising two sons as a single father, while attending college as a full-time student, has been challenging,” he said. “I tell other students that my day is just beginning when they’re kicking back in their dorm rooms.
That’s when I’m switching into Dad mode—handling dinner, baths, packing lunches and other household chores. It’s not until my boys are in bed that I finally get to sit down to work on my assignments.”

He hasn’t done it completely alone, however, and gives credit to his mother and sister, Lucy and Melissa Hawkes of Burkeville, and his girlfriend, Gwendolyn Clements ’06, a third-grade teacher at Crewe Primary in Nottoway County, for their help.

Hawkes plans to be an elementary teacher, and that’s where his sons provide a definite advantage, giving him opportunities to practice his teaching skills.

“I sometimes ask my boys comprehension questions when I’m reading to them at night,” he said. “When I was reading The Three Ninja Pigs, CJ said, ‘Daddy, can you just read the book? Please stop asking these questions.’ I push them, but I let them be kids, too. You need balance—books as well as trains and ninja turtle moves.”

In Hawkes’ first college stint after graduating from high school, he dropped out of Old Dominion University after 2-1/2 years. He drove a delivery truck in Norfolk for a while, then moved back to Crewe, where he worked as a special education aide and a substitute teacher. When he resolved to return to college, he was helping to manage several restaurants, one of which was the student café at Southside Virginia Community College.

“It had been on my mind for a while, so one day I took my apron off and went to talk with one of the counselors there, who told me about the Call Me MISTER program,” said Hawkes. “After I met with Dr. Carter, I said, This is my goal.’”

First, he had to earn an associate’s degree, which he did at SVCC in summer 2013. He then entered Longwood that fall.

Hawkes received the Martha Stokes Cleveland, Lady BoggsWalton and Jerolien Tanner Titmus scholarships during the 2014-15 academic year. The Cleveland andWalton scholarships will be renewed until he graduates.—Kent Booty

If you would like more information about how you can help a deserving Longwood student, please contact University Advancement at gifts@longwood.edu.