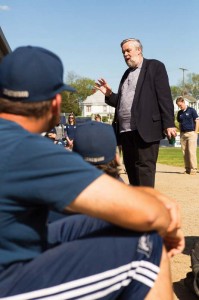 Bill James’ statistical analysis of baseball is often complex, but his assessment of Longwood’s star softball player during a recent campus visit was as direct as a line drive.

“I should tell the Red Sox to recruit Megan Baltzell,” baseball’s most celebrated analyst said of the catcher, who compiled recordbreaking home run numbers during her recently concluded Lancer career.

When I began building a catalog of baseball’s traditional wisdom and checking things out,it turned out that pretty much everything that baseball men all knew to be true was nonsense.’

During a two-day visit in April, James, who is credited with revolutionizing the study of baseball, met with the softball and baseball teams, spoke to several classes and gave the annual Francis Butler Simkins lecture to a standing-room-only audience in Hiner Auditorium.

James’ analysis has been featured in the film Moneyball, earned him cult-like status among baseball fans and helped the Boston Red Sox win three World Series titles since he joined them as a consultant in 2003. The baseball writer and statistician is the father of a method called sabermetrics, which supporters say is a more accurate way to measure players’ value.

“When I began building a catalog of baseball’s traditional wisdom and checking things out,” he said in his Simkins lecture, “it turned out that pretty much everything that baseball men all knew to be true was nonsense.”

James’ visit with the softball team reinforced a point from his talk. Though he once dismissed the
importance of “team chemistry, leadership and the role of character in winning championships,” he now recognizes their value.

“When I walked into this locker room, I couldn’t tell who the superstars are, which is a good thing,” he told the softball team, which this spring won both the Big South regular-season title and the tournament
championship as well.

Several students asked to see the 2013 World Series ring that James wears on his right hand. “It’s probably worth twice what I paid for my first house,” he said after being asked the value of the huge ring.

Among the observations James made during his visit to the Longwood campus:

• Asked who will win the World Series this year, he said the Washington Nationals are “worth watching.”