Longwood student-athletes had collectively one of the most successful academic years in the school’s Division I era in 2014-15, highlighted by a class valedictorian, a five-year high in grade-point averages and an entire trophy case worth of academic awards.

‘To have this kind of success across the board speaks volumes about the work of many people, including the student-athletes themselves.’ 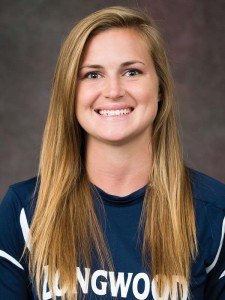 The exclamation point that punctuated the monumental year came during Longwood’s commencement, when Kelsey McDonald ’15, a four-year starter and all-conference player on the women’s soccer team, received the university’s Sally Barksdale Hargrett Prize, given to the senior with the highest GPA in the graduating class (see right). Also Longwood’s first Division I Academic All-American, McDonald recorded a 3.99 GPA as a business administration major to become the second Longwood student-athlete to receive valedictorian recognition in the past four years.

McDonald, of Kennett Square, Pa., headlined a Longwood scholar-athlete contingent that also included soccer teammate and Big South Graduate Fellowship recipient Taylor Cave ’15, a kinesiology major from Virginia Beach, and Big South Lacrosse Scholar-Athlete of the Year Liz Trainer ’15, a kinesiology major
from Ellicott City, Md. In total, 53 student athletes made the Dean’s List during the fall and 56 in the spring, while 13 appeared on the fall President’s List, and 12 received that honor in the spring.

In Her Own Words:

It was truly a moment of utter shock and euphoria hearing my name announced at the 2015 commencement ceremony as the recipient of the Sally Barksdale Hargrett Prize for Academic Excellence. I was focused solely on not tripping as I walked to the stage to shake President Reveley’s hand, attempting to smile through my confusion and disbelief. Reality didn’t really set in until I got back to my seat and read a text from my mom saying she couldn’t stop crying. “Tears of pride and joy,” I believe were her words.

Coming into Longwood as a scared little freshman, I never thought my college career would end like this. None of this would have been possible without the unwavering support of the athletics department, specifically Maya Ozery and the women’s soccer staff, as well as the understanding of the amazing College of Business and Economics faculty.

This award is truly a testament to all of the hard work, dedication and energy that both of these groups have put into ensuring my success. For example, whenever I had to miss class for an away game, my professors
would send an email wishing me luck and offering any help I might need instead of my having to grovel about when to schedule the makeup exam.

I owe this honor to many people: my parents (aka my biggest fans), who showed me the value of hard work; my teammates, who constantly pushed me to be my best; my coaches, who encouraged me never to settle; and my professors, who supported all of my academic and athletic endeavors.

I am beyond thankful for all of these people in my life because without them I wouldn’t be who I am or where I am, today. I am also forever grateful for all the opportunities that Longwood has given me over the years, and I will always be proud to be a #LancerForever.