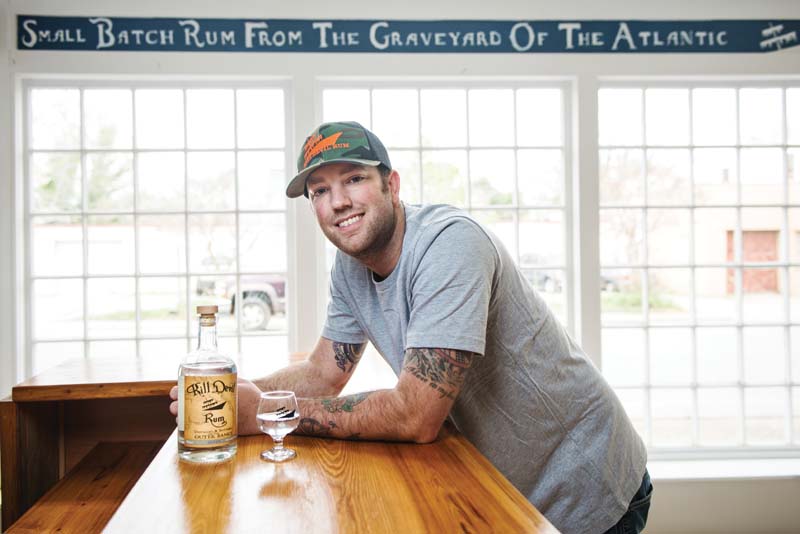 Sometimes friends get together over a drink or two and make big plans. Maybe they dream of one day going into business together and living out their days on the water doing something they all really love.

Usually it’s just words, but not for Scott Smith ’05 and three of his buddies.

On New Year’s Day 2014, they all quit their jobs and embarked on building a business that they hoped would bring back the tradition of rum made locally on the Outer Banks of North Carolina. Today the four longtime friends are the owners and operators of a new, state-of-the-art distillery—Outer Banks Distilling—located in a historic building in downtown Manteo.

“We did the renovations ourselves, the planning, the research and the testing. It’s been a labor of love, and we’re happy about how it has all turned out,” said Smith.

After years of research, and, yes, that included tastings, the makers of Kill Devil Rum have committed to quality with their new product, promising only high-grade ingredients and using only high-end distilling equipment. That business philosophy is paying off: The first bottles of Kill Devil Rum hit local North Carolina store shelves on May 5 and sold out in a matter of hours.

“We use a copper pot still that lets us create a more subtle flavor,” said Smith proudly. We can completely control the process in our three 1200-liter tanks that allow us to manage exact temperatures throughout the fermentation process.”

With experience in brewing and bartending, the four friends behind Outer Banks Distilling—Smith, Adam Ball, Kelly Bray and Matt Newsome—had an understanding of the basics. But what gave them the ability to take chatter among chums and turn it into a budding business?

“The broad education I received at Longwood helped me to be open to realize what I wanted to do, and gave me the ability to learn how to do it,” said Smith.

Looking back about 15 years, Smith was recruited to play baseball at Longwood. His sister had attended Longwood, so there was a family history, and he had his heart set on being a Lancer. An injury ultimately kept him off the field but didn’t stop this member of Alpha Sigma Phi fraternity from earning a degree in communication studies with a minor in history.

It was his fascination with history, along with an entrepreneurial spirit, that attracted him to the idea of opening a distillery on the Outer Banks. The town of Kill Devil Hills is believed to have been named for pirate-era rum “strong enough to kill the devil.” Barrels would turn up in the wreckage of ships just off
the coast in what is known as the Graveyard of the Atlantic. There are even legends of a cache of rum being hidden behind the nearby hill where the Wright Brothers first took to the skies.

“The area has a very rich distilling history and, well, I still think I’m a pirate,” said Smith with a chuckle. “I live on the beach, drive my boat to work and make rum for a living. Yes, it’s a pretty nice life.”—Dan Cawley