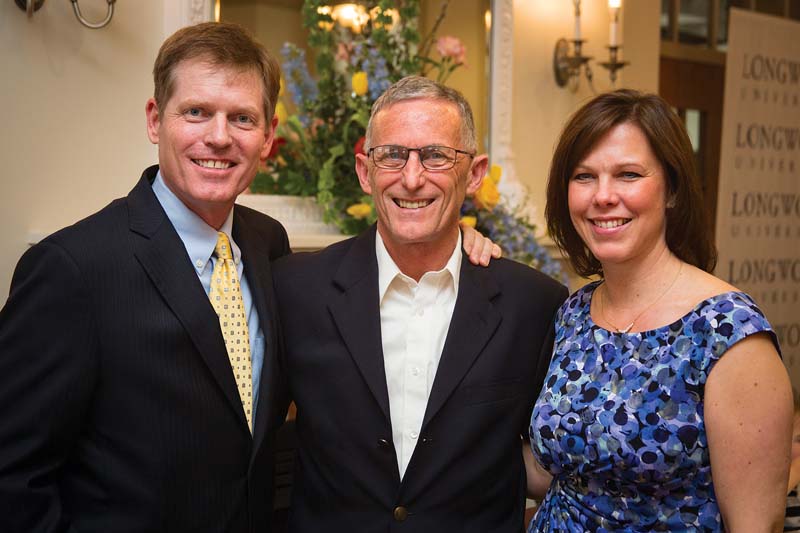 Carol Wisch Blount ’89 almost didn’t finish college. She had the grades and the work ethic—just not enough money.

Instead of being forced to drop out, however, she received a scholarship from an anonymous donor halfway through her junior year. It saved her college career and changed her life, as well as the life of Jason Blount ’90, her future husband.

This spring the Blounts decided it was time to pay it forward.

“If she doesn’t get that money, she has to leave school, and we don’t fall in love and get married,” said Jason, president and owner of Cold Harbor Financial, explaining what motivated him and his wife to give $25,000 to create a scholarship for students with financial need and high academic achievement. Another motivation was a desire to honor Jason’s favorite professor, Dr. Wayne McWee.

The Wayne McWee Scholarship will be awarded annually to a rising junior or senior in the College of Business and Economics.

“I hope our story will spur other alumni to contribute to the scholarship, both to honor a great professor and to help students,” said Jason, who announced the establishment of the scholarship on campus April 3. “Dr. McWee always took the time to talk to me, gave me his knowledge and wisdom, and helped me more than he knows.”

McWee, a professor emeritus of business who retired June 1 after a 31-year Longwood career, was touched by the honor. “For a teacher even to get a little note from a student saying you made a difference in his life is wonderful, but to have one endow a scholarship in your name is a wonderful, wonderful thing,” he said.

One of the most rewarding aspects of his career, however, was getting to know his students and guiding them in their careers.

“Jason was a good student but wasn’t sure of where he wanted to go. I suggested that he consider a career in financial services,” McWee said. Obviously it was good advice.

Jason began his successful career as a self-employed financial adviser two days after graduating from Longwood. He is currently an independent financial adviser with Raymond James. Cold Harbor Financial,
which he opened in 2002, is located in Mechanicsville.

Both Jason and his wife are glad they can share their success with deserving Longwood students who otherwise might not be able to stay in school. Even now, the difficulty Carol had is fresh in her mind.
She had to leave Longwood twice—first in the middle of her freshman year and again after the fall semester of junior year.

“My parents pieced together money for me to go here,” said Carol, who taught elementary school for 17 years and is now marketing director for Cold Harbor Financial. After I left the second time, I got a call about an anonymous donor who had left money for me. I packed my stuff quickly and returned to classes.”

Rising senior Timothy Davis ’16 should be spared a similar experience. A double major in accounting and information systems security from Charlotte Court House, he was named the first recipient of the McWee Scholarship. —Kent Booty