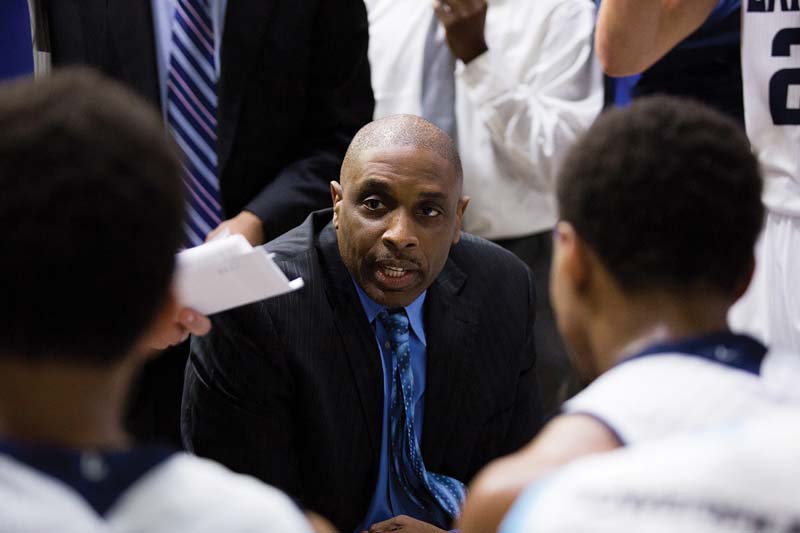 Fresh off a trip to the Big South Championship semifinals for the first time in school history this past March, men’s basketball Head Coach Jayson Gee was named the recipient of the 2015 John Lotz Barnabas Award. The award, presented by the Fellowship of Christian Athletes (FCA), goes to the basketball coach who best exhibits a commitment to Christ, is a person of integrity, encourages others and lives a balanced life.

“The Fellowship of Christian Athletes is honored to recognize Coach Jayson Gee as the recipient of the 2015 FCA John Lotz Barnabas Award,” said Jeff Martin, FCA executive vice president of ministry programs and resources. Coach Gee exhibits all the qualities associated with this award, not only as a coach but as a husband and father. He is a longtime leader and supporter of the FCA ministry.”

Gee received the award April 4 in a formal ceremony at the FCA-sponsored National Association of Basketball Coaches luncheon during NCAA Final Four weekend in Indianapolis, Ind.

“I am deeply honored and humbled by this acknowledgement from FCA,” said Gee, a 26-year coaching veteran now heading into his third season at Longwood. “As a coach and mentor, I run my program with emphasis on five pillars that align our values with the FCA’s mission. I receive this award as encouragement to continue on the journey of impacting the lives of our student-athletes.”

“Jayson Gee is a person of immense character and integrity, and he leads his program based on those values,” said Austin. “The biggest impact a coach has is in how he or she aids the growth of a student-athlete off the court. Coach Gee’s commitment to developing his players in facets beyond basketball is what makes him special.”

Gee wrapped up his second season in Farmville by leading the Lancers (11-23, 5-13 Big South) to three wins in their final four games, including a quarterfinal upset of No.1 seed Charleston Southern in the Big South Championship. The win propelled Longwood to its first conference semifinal since joining the league in 2012-13 and capped a season in which the Lancers won the most overall and conference games in their three seasons as a member of the Big South.