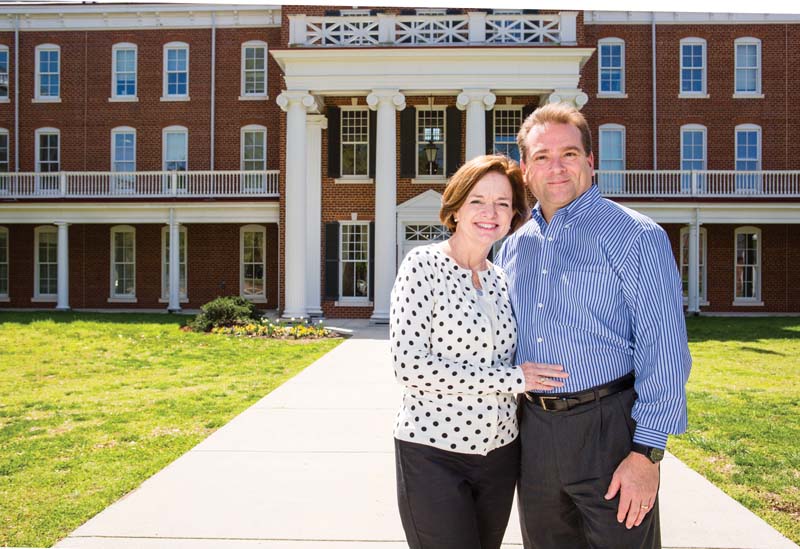 Joan Weidmann Rollins ’84 and Duke Rollins ’82 remain committed to each other and to Longwood
after more than 30 years.

The “fireworks” came for Joan Weidmann ’84 and Duke Rollins ’82 one December night in front of Lancaster Hall, where they met after a Christmas mixer and talked into the wee hours.

The lightning struck nearly six years later, but this time the sparks that were flying didn’t have anything to do with falling in love.

It was Father’s Day weekend, and the pair—an item since that winter night at Longwood—were at the Outer Banks with their parents. One morning a storm came up, and everyone huddled, wet, under an oceanfront house. Duke and Joan leaned against a chimney.

The sky flashed white, and lightning struck the chimney, traveling down and passing through Duke’s back. “It knocks us all off our feet,” said Duke. “My heart stops beating, and I stop breathing.”

Thanks to Joan’s quick-thinking father, who administered CPR, Duke survived. A few months later, he and Joan announced their engagement.

“So there were lots and lots of lightning jokes in the wedding,” said Duke, including gems like, “I guess it took an act of God to get you to marry this girl!”

But he needed no such prodding. He says he had been wooing Joan since he met her at Longwood in 1980, chatting her up during increasingly frequent “chance” encounters.

“I thought it was all coincidental,” said Joan.

“I would call it a strategic interaction,” said Duke. “I had a big crush.”

That crush has evolved into a 28-year marriage, and the couple’s Longwood connection now extends to their daughter, Paige Rollins ’15, who graduated in May. The Rollinses also have a 15-year-old son, Kyle, a sophomore in high school, and they hope he’ll consider Longwood when it comes time for college.

Joan says she knew Paige would love Longwood, but she feared the university might not live up to all the tales Paige had heard over the years. Like the time Duke and his friends dropped a truckload of sand in their residence hall for a beach party. “Indoors!” confirmed Duke. “In our hallway.”

But the hype didn’t prove too much for Paige, who interned in the Office of Alumni Relations this past year and started work right after graduation as a full-fledged staff member focused on increasing engagement among young alumni. “We say she bleeds blue and white,” said Joan.

Joan and Duke also stay in touch with the university through Duke’s volunteer work with the College of Business and Economics’ Corporate Advisory Board. He raises funds for the college and helps Dean Paul Barrett align curricula with industry needs. In his day job, Duke directs sales for Tyco Integrated Security.

Joan, “blessed to be a stay-at-home mom” in Centreville, re-engaged with her Longwood sorority after Paige joined. Those relationships provided a boost when she was diagnosed with breast cancer in 2013. (She recently recovered after a bilateral mastectomy and reconstruction.)

“I’ve gone and done Relay for Life twice with them now. It’s a beautiful thing,” she said, describing the annual cancer research fundraiser.

Of course, most crucial is her husband, who “has been amazing through it all.” But she said she always knew he would be—his “humor and his lovingness” have been on display since the day they met at Longwood.—Beth Cope