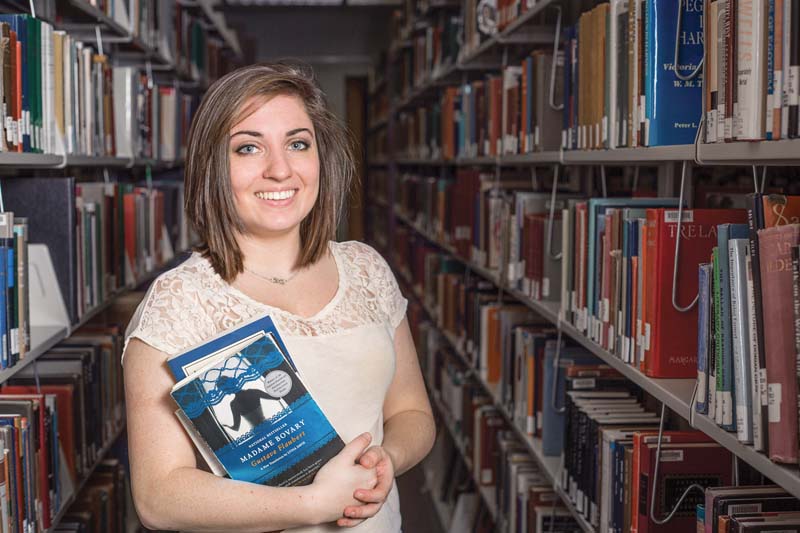 Emily Hines ’16 got the attention of faculty with her tweet requesting a course on banned books.

It was innocuous enough: a simple tweet during a lull in class. It’s the type of thing that happens hundreds of times a day.

But most student tweets don’t end up in front of the department chair, or spark an idea that gains momentum and culminates in a new course taught jointly by 10 professors. Longwood student Emily Hines ’16 didn’t think anything would come from her tweet—she was just struck that she’d like a course on banned books after studying the frequently banned Huckleberry Finn.

“I like the concept of banned literature,” said Hines, of Vienna, who plans to teach high-school English. “What is it that makes this taboo?What is it people don’t want to hear? It’s weird but interesting. They’re just words. How can you ban that? And besides, it’s just fiction. Huck Finn isn’t real.”

Hines’ tweet—“I want nothing more than to take a class on banned books. Help a girl out.”—reached the twitter account of Longwood’s Department of English and Modern Languages and made its way to the desk of the department chair, Dr.Wade Edwards.

“It’s highly unusual for a course to evolve from a single suggestion from a student,” said Edwards. “This is the result of student initiative, social media, a campus awareness of banned books and a willingness to try to something new.”

The result is a high-level elective course titled Contested Books: 1779-Present. Offered in the spring semester, it was taught by 10 faculty members, including four modern language professors. The curriculum follows a chronological path, beginning with the 1779 German play Nathan the Wise and concluding with Harry Potter and the Sorcerer’s Stone. Other books include Huckleberry Finn, the 19th-century French novel Madame Bovary and Richard Wright’s memoir Black Boy.

The curriculum is about not only banned books but also books that have been “censored, challenged or otherwise kept out of readers’ hands,” said Dr. Sean Barry, an English professor and one of the teachers of the course.

Discussion of banned books is nothing new to Longwood’s campus—students in several literature courses study books that are frequently challenged, and the Department of English and Modern Languages partners with the university’s Greenwood Library to host an annual Banned Books Week. But for Hines, it was all coincidence.

“It’s the first and only time I’ve tweeted English and Modern Languages,” said Hines. I thought it was funny the department had a Twitter account, which I had stumbled on a few days earlier. This was an interesting string of coincidences and accidents. None of this was planned, but I’m glad that I sparked the idea.”