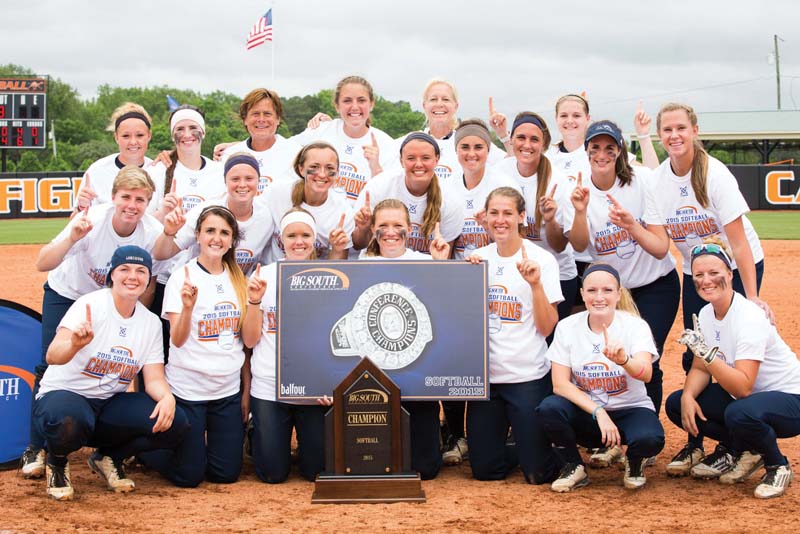 With another Big South Championship, another trip to the NCAA postseason and a season long display of outright dominance at the plate from one of the greatest athletes to ever come through Farmville, the Lancer softball program gave the Longwood community plenty to celebrate in 2015 and made history in the process.

From the towering home runs that came off the bat of two-time Big South Player of the Year Megan Baltzell to the school’s first-ever Division I NCAA postseason win, softball’s 2015 campaign instantly became the stuff of Longwood legend.

The Lancers won both the Big South regular season and tournament championships and earned a bid to an
NCAA Regional for the second time in the past three seasons. That success extended beyond just making the NCAA’s field of 64, however, as the Lancers upset in-state foe Virginia Tech 6-4 in extra innings to earn Longwood its first-ever Division I NCAA postseason win.

The championship and NCAA berth followed an award-winning regular season during which the Lancers swept the league’s three major awards. The Lancers became just the second program in Big South history to win Player of the Year (Megan Baltzell ’15, a sociology major from Stafford), Pitcher of the Year
(Biz McCarthy ’17, a kinesiology major from Dunnsville) and Coach of the Year (Kathy Riley) in the same season.

During the Big South Championships, Longwood received tremendous efforts from Baltzell, McCarthy and Libby Morris ’15, the Big South Tournament MVP. A sociology major from Dillwyn, Morris returned from
a potentially season-ending knee injury to post a 3-0 record with a 1.47 ERA in 19 innings pitched in the tournament. Meanwhile, Baltzell went 4-for-7 at the plate with eight RBIs and eight runs scored to earn All-Tournament Team honors.

Baltzell made even more history as a senior, leaving Longwood as owner of nearly every major offensive record in school history and as the Big South’s all-time career leader in home runs, RBIs and walks. In addition, she ends her career ranked ninth in NCAA history with 76 career home runs, including two seasons with 27 or more blasts.

“Looking back on it, I’m really fortunate to be able to coach a player like Megan,” said Head Coach Riley, who has managed the Lancers for the past 18 seasons with a career record of 578-318-1. “She has played an instrumental part in our success throughout her entire career. She’s left a legacy here that we hope some of the kids who come in after her will try to emulate.”—Todd Lindenmuth