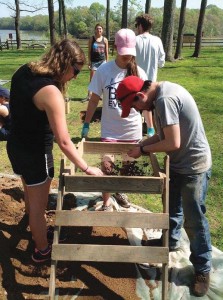 The scritch-scratch of shovels and picks may have been replaced by intermittent beeps of radar devices, but this archaeological dig was in search of one of the earliest English settlements in the New World.

Longwood students were front and center in the search.

Built in 1611 at the pinch point of a horseshoe in the Chesterfield County section of the James River, the settlement of Henricus was lost forever 250 years later when Union Gen. Benjamin Butler dug a canal across the pinch, destroying what little remained of the original settlement.

After looking at maps and records, officials at Henricus Historical Park suspected that remains of the original settlement fort might still be present, buried deep beneath the soil that was excavated for the canal. As they sought to test that theory, they turned to one of the most well-respected archaeology programs in the nation: Longwood’s Dr. JamesW. Jordan Archaeology Field School. The field school director, Dr. Brian Bates ’92, led the excavation of the land where Henricus may have stood.

“Preliminary digs around the area came up negative, but we were probing deep under the surface with ground-penetrating radar and magnetometers to test the park’s theory that remains of the settlement are still intact,” said Bates, adding that their work has not supported that theory. “The real value of this project was the opportunity for my students to engage in problem-oriented field research using cutting edge technology. If we located the ruins of the settlement, that would be icing on the cake.”

“This was quite a unique opportunity,” said Meghan Trant ’15, an anthropology major from Manassas. “Several of us presented our findings from the Henricus project at an archaeological conference in Maryland, which is not something that every student gets to do.” Trant will enter a master’s program in forensic science at George Mason University in the fall.

Henricus’ place in early American history is remarkable. One of the first major settlements after the establishment of Jamestown, Henricus was built farther up the James River on a piece of land that founder Sir Thomas Dale hoped would eventually become the center of Virginia government. Settlers chose the location because it was naturally protected on three sides by the James River, then built walls to keep out hostile Native Americans and eventually expanded outward. It was at Henricus that the captured Pocahontas was converted to Christianity and met John Rolfe. The piece of land was also the site of a Revolutionary War naval battle, and several hulls of burned ships are believed to be buried beneath the river.

“There aren’t many opportunities to dig for a settlement that holds such central importance to the history of our country,” said Bates. “The fact that our students have the opportunity to get out in the field and participate in this dig is quite remarkable.”

Over the years, archaeologists have searched the area where the historical park is located, but no remains of the original settlement were found. During the spring semester, Longwood teams were back out with ground-penetrating radar, which can provide what experts call a “time slice” deep under the surface.

“This technology allows us to get an understanding of what might be underground before we ever dig a single test unit, and it actually helps us determine the best places to excavate,” said Bates. “We can see soil layers as well as locate certain objects that are buried. What we’ve found appears to post-date the period of Henricus, but simply putting this equipment in use gives Longwood students invaluable hands-on experience.”

Bates said it is rare for undergraduate students to have the experience of working a project from its inception through design, implementation and analysis. “When this is combined with the level of technology that we are able to bring to bear on the research question, the experience our students get is unparalleled,” he said.

“We had an incredible opportunity to apply the knowledge that we learned in the classroom,” said Suzy Deeds ’15, an anthropology major from Millboro. “As we worked on this, we all gained a lot of confidence in our skills and got some invaluable hands on experience. That way we can all go into jobs and graduate programs with confidence, knowing that we have what it takes. That’s an opportunity that’s really singular to Longwood.”—Matthew McWilliams