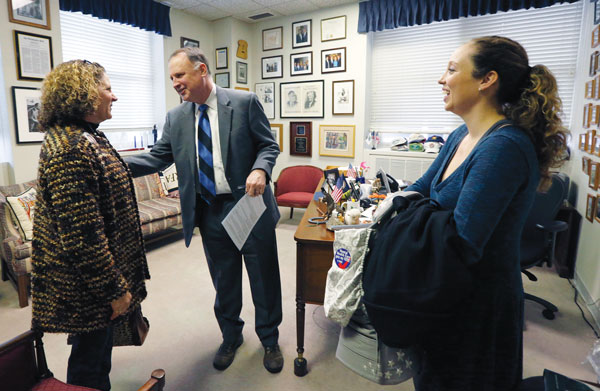 On April 13, 2007, Erica Hilscher, then a Longwood junior, was eagerly looking forward to a visit from her parents and her sister, Emily, who would be arriving on campus soon to celebrate Erica’s 21st birthday.

Three days later, Emily, a Virginia Tech student, was dead, killed along with 31 others by a young man who had previously been diagnosed with a mental disorder.

In their efforts, Garvey, who lives in Chesterfield County, and her mother, of Richmond, represent the National Alliance on Mental Illness and Voices for Virginia’s Children. On the designated day—Jan. 27 this year—they visited the offices of several legislators, including Sens. R. Creigh Deeds and Glen Sturtevant and Del. G. Manoli Loupassi.

Garvey, who worked in the mental health field from 2009 until April 2015, is especially concerned about the lack of transition services for persons who have been identified as mentally ill after they graduate from high school.

“The treatment system is lacking, and we want to keep people from falling through the cracks,” she said.

Even before the death of her only sibling, who was two years younger, Garvey was majoring in psychology. After graduating, she was a case manager with the Daily Planet, a Richmond homeless shelter. She then signed on with the Richmond Behavioral Health Authority, where she worked with adults with serious mental illness.