Moves on chessboard and in life are part of connection forged by dean, student 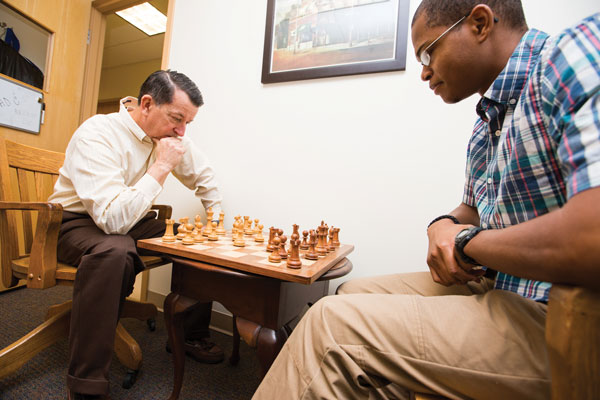 It doesn’t hurt to be friends with the dean— until you start checkmating him regularly.

Alex Morton ’16 breaks out into a wide smile when he talks about playing chess with his favorite partner on campus—physics professor Dr. Chuck Ross, former dean of the Cook-Cole College of Arts and Sciences.

“I beat him pretty regularly these days,” said Morton.

“Not so fast,” said Ross. “I still have a few tricks up my sleeve I can use to get him.”

The origin of the Morton-Ross friendship is somewhat murky—neither can remember the moment they first met. It was probably at a chess club meeting Morton’s freshman year, but, no matter the beginning, it quickly morphed into weekly chess games in Ross’ old Ruffner Hall office, dean and student both staring at a checkered board by the window, contemplating their next moves. After one player emerged victorious, there was time for conversation.

“I always found him thoughtful,” said Ross. He improved very quickly and became the very strong chess player he is today by diving deep down into theory more than most of his peers. Once he sets his mind to something, he goes after it vigorously. More than that, he’s developing into a very strong person with goals he’s determined to achieve.”

For Morton, the relationship that developed went beyond the game.

“I see him as a mentor, and not only on the chessboard,” said Morton, who grew up in nearby Keysville. “When I studied abroad in my sophomore year, Dr. Ross recommended me for a scholarship through the study abroad office and guided me through the process. He’s always taken an interest in how my studies are progressing.”

This spring, Morton will graduate with a degree in history with a concentration in secondary education. His chess games with Ross have become less frequent as student-teaching responsibilities increasingly keep him away from campus, but he’s taken on the mantle of mentorship in his own life.

Morton completed his practicum— a preparatory student-teaching experience— at the Altavista Combined School, teaching sixth-grade history. In his class, he encountered a student with average grades who Morton believed had the potential to excel if only he applied himself. So Morton forged a relationship with the student in the same way he had found a mentor in Ross: over a chessboard.

“We talked about chess pretty often, and he got pretty into it,” Morton said of the student. As Morton begins to close the chapter on his collegiate career and open a new one as a history teacher, chess looms large.

“We all have a passion, and, in order to develop as a person, you need to have a mentor who will challenge you,” he said. “I’m lucky that I found someone like Dr. Ross at Longwood who is one of those people in my life, and I want to pass that along to kids as a teacher.”