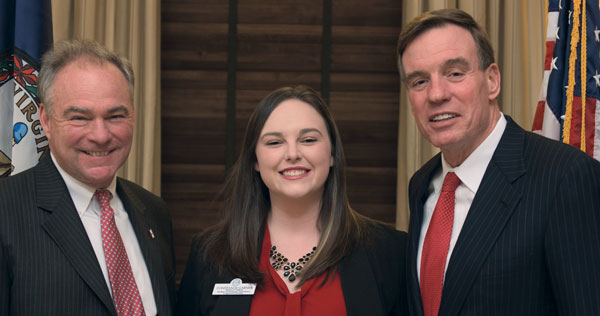 Ms. Garner Goes to Washington
Constance Garner ’16 was one of 20 Virginia college student leaders invited to meet with U.S. Sens. Tim Kaine (left) and Mark Warner in January to discuss the challenges of paying for college and the impact of rising student loan obligations. Garner, president of Longwood’s Student Government Association, is from Clarksville and is majoring in business and minoring in leadership studies and political science.

Three middle-schoolers crowded around a trough of mud in the middle of a lab in Chichester Hall. As if on cue, each of them dug his or her hands deep in the mud and pulled it to one side of the container.

The Longwood students—soon to be teachers themselves—who stood next to the middle-schoolers laughed as a pair of mudcaked hands reached for another pitcher of water to pour onto the pile.

The experiment took place in the middle of a dozen other projects—each one seemingly livelier and more hands-on than the next. Later on in the day, the middle-schoolers walked across campus to Wygal Hall for an equally interactive lesson in fine arts. The children are all from Nottoway County, where opportunities to learn like this aren’t always available.

“We formed this initiative in 2013 and have been working with Nottoway County to hone and expand it every semester since then,” said Dr. Kathy Gee, an assistant professor of environmental science who developed the program. “We’ve worked with the honors program coordinator in Nottoway to take project-based learning to heart and give these kids a hands-on opportunity to study science. We challenge them to think about science in new ways.”

It’s not all science, though. Last year, Nottoway County organizers asked Longwood to integrate a literacy and fine arts component into the initiative that would further reach SOL goals. So Gee reached out to Dr. Pat Lust, professor of music and then coordinator of the liberal studies program.

“We spent half the day with the students focusing on integrating music, drama and art,” said Lust.

This year, the fine arts project was built around one of the most familiar and iconic tunes in the American canon: “Yankee Doodle Dandy.” The children learned several verses to the song, then added instrumentation, created original choreography and, finally, wrote two new verses to the song based on what they had been studying in science class.

The benefits for the middle-schoolers are only part of the story, however.

For the Longwood students, most of whom are liberal studies majors and pre-service teachers, the project is an initiative that lets them interact with schoolchildren before they even step into a classroom and learn to identify and hone in on SOL points the students need to address.

“This may be their first real experience working with students,” said Gee.