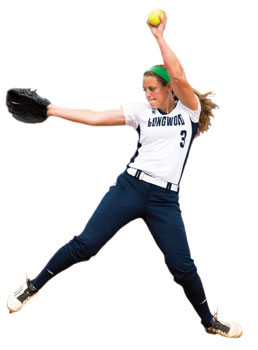 Coming off a banner season in 2015 that included Longwood’s first NCAA Tournament win of the Division I era, expectations are lofty for the Longwood softball program heading into the 2016 campaign.

Riding on last year’s success, which included the team’s second Big South Tournament championship and first Big South regular season championship, 2015 Big South Coach of the Year Kathy Riley and her Lancers opened the 2016 season as favorites to capture the conference crown. Early in the season, the team was 9-7.

McCarthy looks to build off a sophomore season in which she finished with the fourth highest number of wins in a single season in school history (22) and tied for the school record in single-season strikeouts (203). The ace of the 2016 staff, McCarthy is positioned to climb Longwood’s career record books, as she is already third in school history in career strikeouts (348) and needs 234 in her final two seasons to set the program’s all-time record.

“Biz naturally treats people very well and is always thinking of someone else,” Riley said. I think it’s going to be easy for her to take Sydney [Gay] and Sydney [Mundell] under her wing, just because it’s a natural part of her personality.”

At the plate, Longwood will look to fill the void left by the graduations of All-American catcher Megan Baltzell ’15 and Chelsea Sciacca ’15, who paced a Longwood offense that blasted 82 home runs—the second highest in Big South history.

“I’ve already heard many times that we can’t replace Megan, so I’ve already come to terms with that,” Riley said. “Obviously, if you look at her production, she is the greatest player we have had in the history of our program, and I appreciate all of the things she has done for us.” 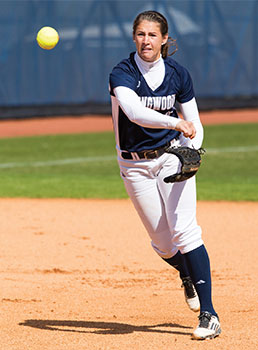 Emily Murphy ’16, an exercise science major from Virginia Beach, and Justina Augustine ’17, a liberal studies major from Warrenton, will be the spark plugs of the Longwood offense. Murphy—a three-time All-Big South selection and a two-time first team All-Big South selection—will lead the Lancers at the plate after coming into the season with a career .291 batting average and belting 38 home runs with 141 RBI.

Meanwhile, Augustine looks to build off a breakout 2015 season in which she was named All-Big South first team after hitting .298 with 48 runs, 23 RBI and seven home runs, a slash line she achieved from the leadoff spot in the batting order.

After each being named to the All-Big South second team in their rookie campaigns, Kelsey Sweeney ’18, a biology major from Newport News, and Glenn Walters ’18, a psychology major from Glen Allen, will seek to continue their improvement heading into their second seasons. Walters took over the everyday job in center field and finished second on the squad in Big South play in batting average while blasting eight home runs. Meanwhile, Sweeney raked a .301 batting average that was the third-highest on the team.

The Lancers opened the 2016 season with a four-day round-robin tournament in Columbia, S.C.