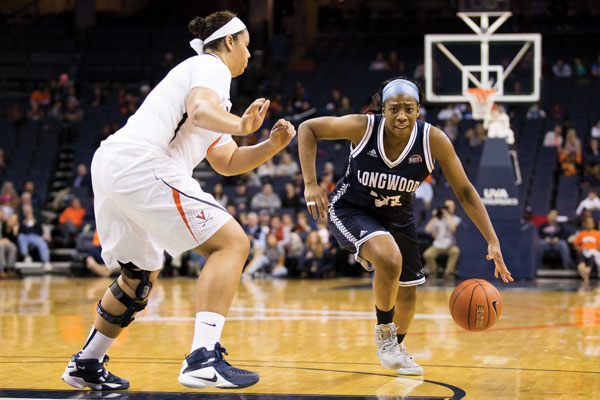 Eboni Gilliam ’17 played for the Cape Fear Sea Devils before transferring to Longwood.

For Longwood forward Eboni Gilliam ’17, the drive to play Division I basketball outweighed the difficulty of the long path ahead of her to perform at that level of competition.

The first step was to leave her community college in Nebraska to journey south and play for Cape Fear Community College in Wilmington, N.C.

“When I had to switch schools, I realized that this was a sport that I really wanted to play,” she said. “I just knew that I didn’t want to give up. I knew that it was my passion. I wanted to keep going, [and] I wanted to find another way that I could play and be on someone’s team and make a difference.”

So she played for the Cape Fear Sea Devils for two years to hone her skills and better develop herself as a player. During her time there, Gilliam posted 33 double-doubles and was named first team All-Region both seasons. She was also a two-time team captain, and, during her sophomore year, she averaged 13.6 points and 10.2 rebounds per game.

Longwood was familiar with the Richmond native coming out of Lloyd C. Bird High School. They saw her during a Richmond tournament and were excited to see how much she had improved during her time at Cape Fear.

“She was always very physical, could go around the basket, but she had her little jumper,” said Longwood women’s basketball head coach Bill Reinson. “She always played hard. We felt she’d be a great fit.”

How did Longwood convince the junior college standout to come to Longwood? “Karaoke,” said Reinson with a chuckle.

“We’re a good group. I mean, we’re fun to be around, and if you’ve hung around us long enough, it’s an easy group to fit into, so it’s got a family feel.”

Gilliam said she knew about Longwood’s struggles as she considered transferring but was really attracted to the team’s familial bond.

“When I came here, I knew they had a losing record. I knew a lot of the players were injured. When I came on my visit, everyone just seemed like a family, and everyone cared about each other. Just being so close together, I knew that if we just bonded and if I could just step up and try to make a difference then it would be fine and we could work something out,” she said.

It was then that Gilliam made the choice to come to Longwood, becoming the first Lady Sea Devil to sign with a Division I school. Once at Longwood, Gilliam said she had to adjust to the quicker pace of Division I. With a handle on the speed, she has made a major impact on the team. Nearing the end of the regular season, she led the team in rebounding, ranking in the top 10 in the Big South.

“I made a couple of goals for myself, and I haven’t really reached them yet, but it just feels good to know that I’m coming in here doing what I can to impact the team in my first year,” said Gilliam.

“If you didn’t know our team and you came in, you probably wouldn’t be able to tell she’s a transfer.”
— MICAELA ELLIS ’18

Against Charleston Southern on Feb. 6, she had her second double-double of the season, sinking 18 points along with 14 rebounds, a game-high.

“She [Gilliam] works hard every day in practice. She does the dirty work underneath for us. She rebounds, she plays around the hoop, she defends bigger players, and she has a positive attitude on the court,” said Reinson.

Gilliam has impacted both the team’s stat sheet and culture with her positivity.

“Eboni is probably the most positive person on our team. Not having her last year, that adds something to our team,” said sophomore guard and friend Micaela Ellis ’18, a kinesiology major from Oak Park, Mich. “When we lose games or we get down on each other, she’s one to usually step in and keep your spirits high and stuff like that. You can pretty much count on her to be the positive influence.”

Ellis added that Gilliam has easily transitioned to become another member of their basketball family.

“If you didn’t know our team and you came in, you probably wouldn’t be able to tell she’s a transfer. You’d probably think she’s been here with us all her three years.”

For Gilliam, the sport she loves is an outlet. It’s her passion, and it has given her a new family to bond with while facing their current struggles.

“I love the sport to death—I wouldn’t change it for anything,” said Gilliam.

“We laugh together all the time, and, even though there are bad days, we still try to find different ways to make the day better or make practice better or make the game better.”