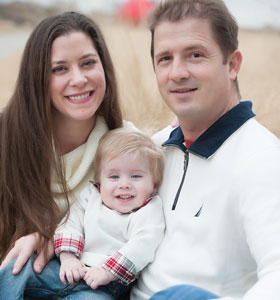 Tracie Linden Leeper ’01 and her husband, Gard Leeper, made a $10,000 gift to Longwood’s Speech, Hearing and Learning Services in memory of their son, Jack.

Children with developmental delays who seek help from Longwood’s Speech, Hearing and Learning Services (SHLS) have a special friend there they’ll never get to meet. His name was Jack William Gard Leeper.

Jack, the son of Tracie Linden Leeper ’01 and her husband, Gard Leeper, died at 18 months from Leigh’s Disease, a rare, progressive mitochondrial disorder for which there is no treatment or cure. Though Jack was never treated at SHLS, Tracie Leeper’s strong ties to her alma mater motivated her to look for a way to commemorate her son’s life somewhere on the Longwood campus.

After talking with Chris Neal ’05, leadership gift officer in Institutional Advancement, the Leepers decided to make a $10,000 gift to SHLS to benefit its Infant and Toddler Connection of the Heartland (ITC) program, which provides early intervention services for children from birth to age 3 who are experiencing developmental delays.

On Feb. 8, the first anniversary of Jack’s death, the ITC intake/ assessment room in the SHLS offices was dedicated in Jack’s memory. Jack’s Room is the first stop for all children referred to the ITC, and each child will receive a copy of Jack’s favorite book, Guess How Much I Love You. The gift will also provide operational support for ITC.

“This gift will literally touch the lives of hundreds of children,” said Dr. Lissa Power-deFur, SHLS director and professor of communication sciences and disorders. “There is never quite enough to fund the program, so this provides a valuable financial cushion.”

The plaque outside Jack’s Room includes the phrase “Reach For The Stars,” the slogan that his parents have adopted in their campaign to fund research for, and promote awareness of, Leigh’s (pronounced Lay’s) Disease. “We came up with that because Jack was reaching for Christmas lights in a photo taken in December 2014, and artwork we had purchased for his room said ‘Reach for the Stars,’” said Tracie Leeper, who lives in The Colony, Texas, a Dallas suburb.

She is a volunteer with the United Mitochondrial Disease Foundation (UMDF) and is chairing this year’s UMDF Energy for Life walkathon in the Dallas area set for April 30. Jack has a walk team, “Jack’s Travelers,” whose members will wear T-shirts in Jack’s favorite colors of orange, green and blue and reading “Reach for the Stars, Keep Smiling, Be Happy.”