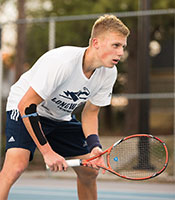 For a program that spent the summer without a head coach, the Longwood men’s tennis team has come a long way in seven short months under first-year head coach Pierre Tafelski. Tafelski came to Longwood after a two-year stint at Division II powerhouse Hawaii Pacific, where he was named ITA National Assistant Coach of the Year in 2013-14 after helping the program reach the NCAA Division II National Championship match in 2014.

“We had probably our most successful fall since I’ve been here, and this is my fourth year here,” said Bharani Sankar ’16, a business major from Glen Allen. “Coach Tafelski came in this fall, and the culture of the program completely changed from what it was from the past year and in years prior.”

“I think all of our players individually worked hard and improved,” said Tafelski, but Farthing improved the most during the fall. I’m expecting good performances from our freshmen this spring. Florian Uffer also worked really hard in the fall and had very good results.”

Part of Longwood’s immediate success stems from an improved work environment created by Tafelski that has changed how the Lancers prepare for the grind of playing a fall and spring season.

“He really helped us understand that there’s so much more that goes into tennis than just playing,” said Sankar. “There’s fitness, as well as a mental aspect. He’s helped us gain a new, positive mentality.”

Tafelski hopes his leadership can propel Longwood men’s tennis into becoming contenders in the conference.

“I definitely see this program being one of the leaders in the Big South within the next two to three years,” he said. 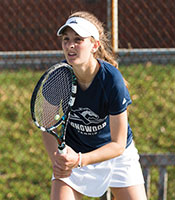 The Lancers won 10 matches last season, doing so for only the third time in Longwood’s first eight seasons at the Division I level. Myers’ second edition of the Lancers returns four of six singles starters, including four upperclassmen.

“It’s going to be a lot different than last year because Anna [Pelak], Mason [Thomas] and I are stepping up as captains,” said Paloma Alatorre ’17, a communication studies major from Guadalajara, Mexico. “We have a lot of new players, so I’m excited to see what we’re going to look like on the court.”

Alatorre is one of four veteran players who comprise the core of Longwood’s 2015-16 squad. The other three “core” members are Pelak ’17, a liberal studies major from McLean; Thomas ’17, a history major from Buchanan Dam, Texas; and Maria Coronel ’16, a communication studies major from Arequipa, Peru. These four locked down Longwood’s Nos. 2-5 singles slots last season and return to those roles this year.

Myers also brought in five freshmen to round out the team, including nationally and internationally ranked juniors player Fallon Burger ’19, undeclared, from Fort Myers, Fla., who has stepped in as Longwood’s ace at the No. 1 singles spot.

Myers’ impact on the program was immediate last season, and that carried into fall 2015. Longwood capped the preseason with back-to-back wins over Mount St. Mary’s, 4-3, and La Salle, 6-0, in October, both countable victories that pushed the Lancers to a 2-0 start in the spring.

“It’s been amazing,” Alatorre said. “Coach Myers is a really good leader for our team. From the results last year—his first year— you can see it. When we’re with him we just feel strong and that we can be successful.”