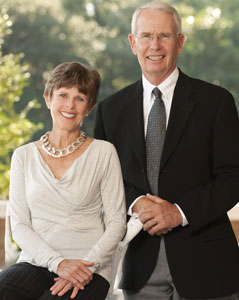 Joan ’64 and Macon Brock have received a national award for their longtime philanthropic efforts.

The Virginia Beach couple were honored in November 2015 as the nation’s Outstanding Philanthropists by the Association of Fundraising Professionals (AFP). The Brocks have donated primarily to charities in Hampton Roads that promote education, the arts and the environment. The Brocks were nominated for the national award by the Hampton Roads AFP chapter.

Joan Brock is especially proud of Brock Commons at Longwood, the result of one of the couple’s first gifts.

“We’re proud of what that has done for Longwood, and, of course, I’m proud of my alma mater,” she said. “I’m very pleased with the direction the university is moving in, and I’m sure the [vice presidential] debate will be fabulous. Longwood is an important part of my life. I still enjoy lifelong friendships, many of whom I see three or four times a year.”

An article in The Virginian-Pilot called the Brocks’ 51-year marriage a monument not only to love but also to philanthropy.”

“Macon and I have been extremely fortunate and have enjoyed a lot of advantages many people haven’t had,” Joan Brock said when asked why philanthropy has been such an important part of the couple’s lives. “You just give back. It’s the American way.”

Three days after receiving the award at a New York City dinner, the Brocks received the Individual Darden Award for Regional Leadership from the Norfolk-based CIVIC Leadership Institute. The award recognizes outstanding leadership in the Hampton Roads community. Lt. Gov. Ralph Northam was among the speakers at the awards ceremony.

Also in November, Joan Brock was the keynote speaker at a luncheon in Norfolk that celebrated National Philanthropy Day.