Project on private Caribbean island among first for Institute of Archaeology

Giving students hands-on experience, literally uncovering history and providing job opportunities for Longwood graduates are just three of the reasons to declare the university’s new Institute of Archaeology a winner right out of the gate.
One of the institute’s first projects took four students and two staff archaeologists to a privately owned Caribbean island for a week in January.
The institute’s research was funded by the owner of Guana Island, an 850-acre island just off the northern coast of Tortola in the British Virgin Islands, to examine the island’s prehistoric occupation. Co-directed by Dr. Brian Bates ’92, professor of anthropology, and Mary Farrell ’09, the institute’s laboratory and field supervisor, the project will be long term, with institute teams planning to return each summer, beginning in 2017. 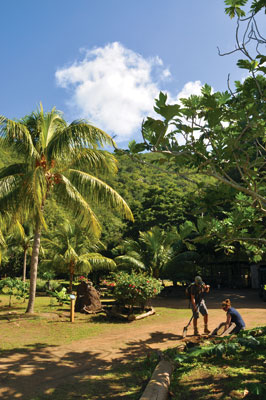 Longwood’s new Institute of Archaeology kicks off with a project in the Caribbean. Photo by Dr. Brian Bates ’92.

The Guana Island work is the third project undertaken by the institute, which was founded in September 2015 by Bates. Staffed by three Longwood-trained archaeologists, the institute is self-supporting and provides undergraduates with practical, real-world experience.

“The institute seeks to engage students on a deeper level,” said Bates, executive director and senior principal investigator. “To be in the field and to use sophisticated equipment like we did on Guana gives students a much better understanding than if they had learned in the classroom.”

Farrell echoed Bates’ enthusiasm about the Guana Island project. “Because it was a pristine location, it was a great place to conduct research. It was a phenomenal experience that produced great results,” she said.

The archaeological survey consisted of a typical shovel test pit survey, in which they dug holes about 1 meter deep every 15 meters on a grid across the flats.

“To be in the field and to use sophisticated equipment like we did on Guana gives students a much better understanding than if they had learned in the classroom.”
— BRIAN BATES ’92, PROFESSOR OF ANTHROPOLOGY

For the geophysical survey, they were helped by two geophysicists from Naeva Geophysics of Charlottesville. The geophysicists taught the students how to use the equipment for a magnetometer survey and a ground-penetrating radar survey, which Bates called “unprecedented at the undergraduate level.”

The team identified two prehistoric archaeological sites, both occupied by Taino Indians from about 700 A.D. to about 1400 A.D. We knew there was something on Guana Island. Now, because of our week there, we know there’s a lot there,” Bates said.

The students who went to Guana Island were anthropology majors Kristin Converse ’17 of Cartersville, Daniel Parrish ’17 of Glen Allen, Tyler Rocke ’16 of Virginia Beach and Jordan Wilson ’17 of Powhatan.

Everyone from Longwood stayed at Guana’s stylish 36-guest resort, which Bates said is about all there is on the island.” 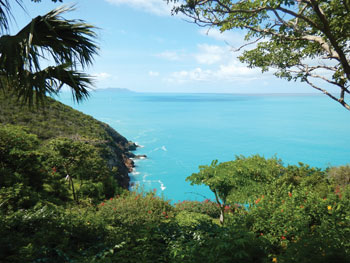 Other institute projects include a shoreline erosion project in the Northern Neck and the Middle Peninsula, and a survey of Cedar Grove, an early 19th century plantation in Mecklenburg County, completed in December 2015. Funding came from a variety of sources, including the National Park Service and the National Trust for Historic Preservation.

In addition to Farrell, the other institute staff members are Craig Rose ’00, principal investigator, and Erin West ’09, field supervisor. All three have master’s degrees in archaeology (Farrell from Ball State University, the other two from University College London, where Bates earned his master’s and Ph.D.).