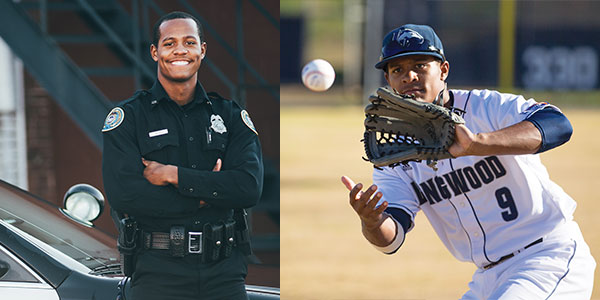 When he’s not in class or on the diamond, Janos Briscoe ’17 is a reserve police officer and volunteer firefighter.

“Man, that’s a tough one,” Janos Briscoe says as he ponders the latest question: What makes him more nervous—facing a left-handed pitcher on a 1-2 count or having a difficult shift at one of his two part-time jobs.

Most college students would have no problem answering that question. But Briscoe ’17, a lefty swinging outfielder, is different.

When he’s off the diamond and on the job, he’s putting his life on the line, either as a reserve police officer or as a volunteer firefighter. To say the least, he has a loaded schedule. A criminal justice major from Bowling Green, Ky., Briscoe transferred to Longwood in the summer of 2015 from Volunteer State Community College. Along with his academic load, he has workouts, practices, games and, of course, the demands of those two part-time jobs.

It’s not easy, but Briscoe attributes his “juggling” ability to his mom, Leslie Briscoe, and his upbringing. As a kid, he played multiple sports, but he never lost sight of his first love: baseball. It’s a sport he shares with his father, Janos Briscoe Sr., who played baseball at Western Kentucky and then two seasons in the minor leagues in the Texas Rangers system after being drafted in the 34th round of the 1994 MLB Draft.

“I guess baseball is in my gene pool,” Briscoe said. “I saw baseball one day, started playing it, and I’ve been playing it since I could walk.”

“One of my [high-school teammates] had an uncle who worked as a firefighter. When he was planning on joining his uncle and signing up at the department, he told me to come on out,” Briscoe said. “I started working as a firefighter, and since then it’s been going strong. I love it.”

“Yes, I’ve run into a burning building a couple times,” said Briscoe, who serves with the Richardsville (Ky.) Fire Department. “Sometimes the thought occurs that you may not make it out, but while it’s going on you’re just focused on helping whoever needs help.”

“As an officer, you just need to be down-to-earth and treat others like human beings. You should always treat people with the same respect you would want if you were in their situation.”
— JANOS BRISCOE ’17

After high school, he headed to Volunteer State, where he received a scholarship and starred in the outfield. He majored in criminal justice, earning his associate’s degree, which created a connection with the Gallatin (Tenn.) Police Department. After going through a mock interview at the department, he was asked to enroll in training to become a reserve police officer.

“I’ve loved it,” Briscoe said of his time as an officer. “As an officer, you just need to be down-to-earth and treat others like human beings. You should always treat people with the same respect you would want if you were in their situation.”

Briscoe may be in the reserves as a firefighter and as a police officer, but he’s expected to have a much different role with the Lancers in 2016 as one of six transfers brought in by second-year head coach Ryan Mau, whose team is off to a good start with a 7-5 record.

Mau, entering 2016 after a 22-34 (9-15 Big South) record in his first season, hopes Briscoe will be a nice addition to the middle of the order and a stalwart in the outfield while making a similar impact in the clubhouse.

“He’s developing as a team leader on the field and is a citizen leader off the field,” Mau said of his right fielder.

And that question that temporarily stumped Briscoe? He eventually came up with an answer: “I’m going to go with the lefty and a 1-2 count,” he said. “Lefties are pretty tough to face.”