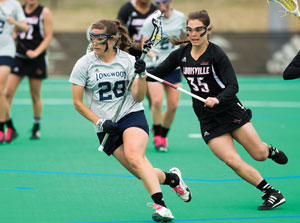 Following the graduation of seven core seniors, Longwood’s women’s lacrosse squad will look much different in 2016. But despite the exodus of a senior class that made up nearly half of Longwood’s starting lineup last season, one thing remained constant for the Lancers under fourth-year head coach Elaine Jones: another top-five finish in the Big South.

To repeat that feat and climb even higher in the standings, Longwood will rely heavily on leadership from the new crop of seniors, including preseason All-Big South selections Sarah Butler ’16, a physical education major from Melbourne, Australia, and Shiloh McKenzie ’16, a criminal justice major from Lothian, Md.; 2015 points leader Katie McHugh ’16, a communication studies major from Burke; and 13-game starter Lisa Schell, an exercise science major from Spencerville, Md.

“The four of us will try to relate our experience to the whole group,” said McHugh. “We’ve been through the same things they’ve been through and they’ll go through. We’ll need to show this young group what we can do to help ourselves on the field as well as what not to do that might keep us from having success.”

Aside from their roles as mentors and leaders, Longwood will lean on the play of that stellar senior class that has proven itself as one of the best in the Big South.

“I look forward to the contributions that our freshman class will make this year,” said Jones. However, our four seniors have a lot of experience and have had success at their positions, so they’ll be counted on to lead us from all over the field.”

After being selected to finish in sixth place in Big South preseason poll, the Lancers hope to outperform those expectations and climb back into the top tier of the conference.