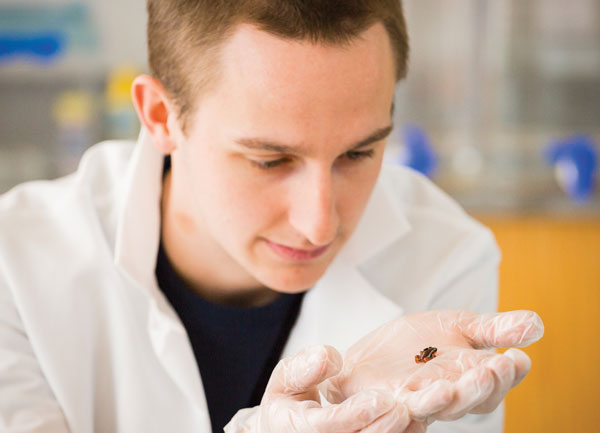 Every morning at 8 o’clock last semester, even weekends, one of five students from a Longwood ecology class walked across campus with food on his or her mind. Pancakes at the dining hall? No—feeding poison dart frogs in the science building.

Each mealtime in the lab, the student dropped 10 wingless, calcium powder-dusted fruit flies into a glass-topped aquarium, then recorded how long it took the frogs—individually, in pairs or in groups of three that are reshuffled every three days—to eat them.

“The frogs all have a personality. Some, we’ve learned, are hungrier than others,” said Devin Straub ’17, an integrated environmental sciences major from Maidens.

The early morning experiments might eventually shed light on a poorly understood biochemical process that creates the frogs’ bright colors, a defense mechanism that warns predators to keep their distance. The colors result from chemicals the frogs ingest as a part of their natural diet and then store in their skin in a process called sequestration. In the first phase of a long-term research project, the students and biology lecturer Dr. Jeff Bardwell were investigating the role that diet plays in sequestration. The work also might yield information on plant biodiversity in the frogs’ native habitats.

At the center of the research is a family of chemicals called alkaloids. “We know the frogs ingest hundreds of alkaloids but preferentially sequester only a few,” said Bardwell, a behavioral ecologist. “We want to know why and how they sequester the ones they do.”

The students worked with six captive-bred poison dart frogs—nontoxic, unlike their highly toxic counterparts in the wild—that Bardwell keeps in a vivarium in his office. The tiny, bold-colored frogs are from a species called Epipedobates anthonyi.

Bardwell is interested in how these frogs sequester epibatidine, a nicotine-related analgesic alkaloid, to examine the relationship between alkaloid structure and sequestration preference. Because epibatidine is 200 times stronger than morphine but not habit-forming, pharmaceutical companies are trying to produce a less toxic derivative with analgesic properties, which has shown promise.

Epibatidine and other alkaloids, a diverse group of organic compounds, are absorbed from unknown invertebrates, likely beetles, ants or mites, that the frogs eat in the wild. The insects acquire and/or synthesize alkaloids from plants, said Bardwell.

“Frog populations often act as ecological and biochemical indicators of the state of their respective habitats,” he said. “This field of study offers new insights into global hotspot biodiversity within rainforest ecosystems. Save the frogs; save the world.”