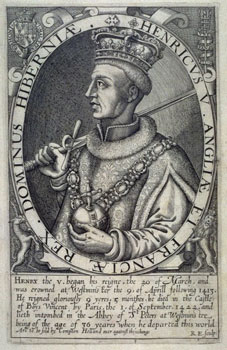 A surgeon saved the life of Henry V in 1403 after he was shot in the face with an arrow. Illustration
by Reginald or Renold Elstrack,
Baziliologia, A Booke of Kings (1618). Reprinted from www.famsf.org.

At the Battle of Shrewsbury in 1403, future King Henry V was shot in the face with an arrow that lodged six inches deep into the back of his skull. A surgeon saved his life. Skilled medical care in a period often associated with wanton violence? Indeed, says a medieval scholar who recently published a book on the subject.

Dr. Larissa “Kat” Tracy, associate professor of medieval literature at Longwood, is the co-editor of Wounds and Wound Repair in Medieval Culture, the latest of several books she has published on torture, brutality and violence in the Middle Ages. As with much of her scholarship on medieval life, the book paints a picture of this period that might surprise some readers.

“Wound repair was fairly sophisticated in the medieval period. Most people assume that it was not sophisticated, but it was,” said Tracy. “For example, they used maggots to debride necrotized skin and used honey as an antibacterial to prevent infection.

“We know from 12th-century surgical manuals that they knew how to treat skull fractures. There is no way to know if they had anesthesia, but they understood opium and herbs, so I imagine they figured it out,” said Tracy, adding that forensic archaeologists have determined from studying disinterred remains that “a lot of wounds healed.”

Honey was used to treat the dire wound sustained by Henry V, then a 16-year-old prince, which is detailed in one of the book’s chapters.

The book features 23 contributors from a variety of fields, including archaeologists, art historians, historians, literary historians, theologians, linguists and medical experts. It was co-edited by Dr. Kelly DeVries, a professor of history at Loyola University Maryland, who is an expert on medieval warfare.