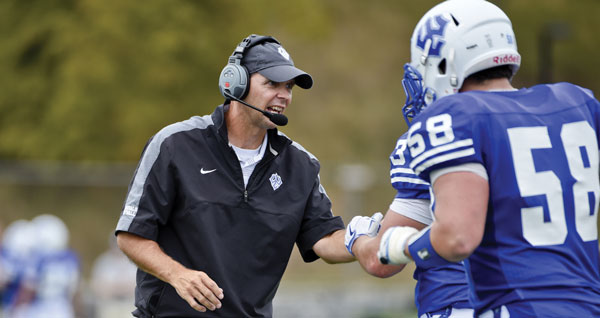 In 1991, Scott Abell ’92, was starting catcher on the record-setting Lancer baseball team that advanced to the Final Four of the Division II World Series. The following year he was drafted by the Kansas City Royals and hit a home run in his first professional at bat.

Fast forward a little more than 20 years, and Abell has made his mark not on the diamond but on the gridiron, as head football coach at Washington and Lee University in Lexington.

In 2015, he guided the Division III Generals to the best season in the school’s 123 years of football, with a 10-1 overall record (10-0 in the regular season). It was the team’s first undefeated regular season in 54 years. In recognition, he was named Old Dominion Athletic Conference Coach of the Year and College Division Coach of the Year by the Virginia Sports Information Directors organization. He also received the Willard Bailey Award as the top college coach in Virginia from the Touchdown Club of Richmond.

“I thought we’d be good, but I thought we were a year away from what we achieved this season,” said Abell, who is already preparing for the 2016 season. “As a coach, it’s great to see plans come together, to see teams come together.”

Abell gives much of the credit for the Generals’ success last season to senior leadership on the team and a record-setting option rushing attack.

“We got fantastic, unmatched leadership from our whole group of seniors. They were a very unselfish group, and I think for any team that becomes great that has to happen,” he said.

Unselfish is an apt description of a team that led the nation in rushing last season at all levels of college competition— without a single 1,000- yard rusher.

“It was always about what was best for the team,” said Abell.

The Generals averaged 433.9 yards per game on the ground and set offensive records for total offense with 5,439 yards, rushing offense with 4,773 yards and scoring with 417 points. The team’s only loss came in the NCAA Division III Tournament.

Abell’s own experience in racking up yardage as a football player was in high school, where he was the starting quarterback. When it came time for college, he chose a baseball scholarship at Longwood because that sport gave an athlete of his relatively small size more options.

“It was the best decision I ever made because, first and foremost, I met my wife at Longwood,” he said, referring to Crissie Abell ’92.

Abell was an all-region player and team captain as a Lancer and was inducted into Longwood’s Hall of Fame in 2011.

He said he learned the most about leading a team during his time at Longwood.

“You take something from every coach you play for, and I cannot imagine where I’d be without Coach [Buddy] Bolding,” said Abell. He taught me that you’ve got to show up every day, work your hardest and have a passion for the sport.

“Coaching is about people, building relationships and getting the best from the people who play for you,” he said. “You can be successful in sports by doing it the right way and staying committed to your core values.”

Abell remains committed to his favorite team: his family. His wife is a veteran teacher; his son, Porter, is a wide receiver at the University of Richmond; and his daughter, Emily, is a cheerleader and plays for her high school tennis team.