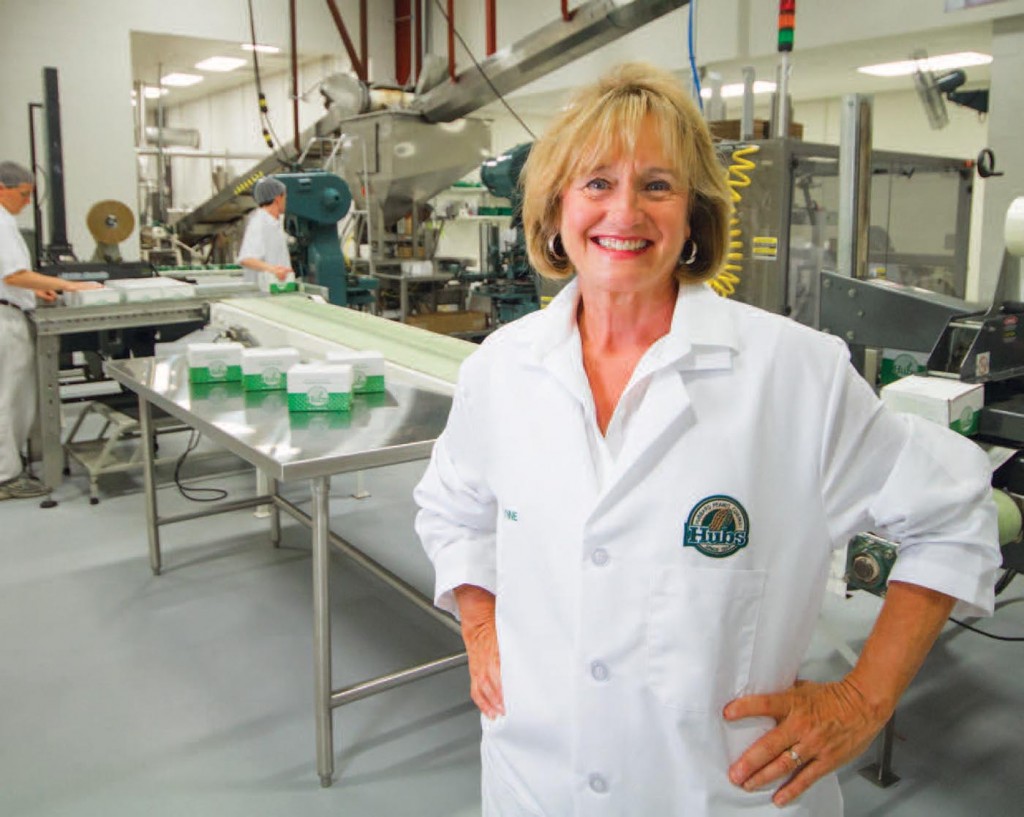 They say home is where the heart is. For Lynne Hubbard Rabil ’75, it’s also where you find peanuts.

As president of Hubbard Peanut Company since 1993, Rabil continues a family business tradition begun by her late mother Dot Hub- bard ’47. Headquartered in Sedley in what was once the Hubbard family home (Rabil’s office is in the childhood bedroom she shared with her younger twin sisters), “Hubs” now reports global sales and boasts 32 year-round employees plus more than 20 additional staff members during its busy holiday season.

‘There’s definitely an element of nostalgia attached to our product. But what keeps our customers coming back is quality. Our focus is on ensuring that quality remains true.’

“There’s definitely an element of nostalgia attached to our product,” said Rabil.“But what keeps our customers coming back is quality. Our focus is on taking care of the customers we have and ensuring that quality remains true. We’ve grown and managed larger volumes while maintaining consistency, and we never lost quality along the way.”

Rabil’s mother started the business in 1954. A teacher turned stay-at-home mother of four, Hubbard was looking for a way to earn some extra money. She’d remem- bered how back in college her Longwood (then Farmville State Teachers College) friends had always loved her specially prepared, crunchy peanuts. Working from her kitchen, she began blanching and deep-frying peanuts, using essentially the same recipe she had learned growing up on her father’s Virginia peanut farm.

Soon a line of customers could be found queued up at the kitchen door. Then local drug stores, gift shops and restaurants began placing orders. Colonial Williamsburg was a large customer early on.

“Mornings after watching ‘Captain Kangaroo,’ we kids would load into the station wagon and help mom make deliver- ies,” said Rabil, who graduated with a degree in history. “As young children and teenagers we also helped with packaging. It was truly a family business from the beginning.”

As demand for Hubs grew, Hubbard farmed out the task of shelling peanuts to local women. And though the family-owned company’s achievement is in many ways a story about women (Hubs is certified by Virginia’s Small, Women and Minorityowned Business program) men also are integrally involved in Hubs’ ongoing success. Rabil’s late father, H.J. Hubbard (nicknamed Hub), for whom the brand was named, worked with local machinists to create equipment that allowed the company to produce large volume at one time.

Now Rabil’s son, Marshall, who’s currently working for Whole Foods, has expressed an interest in getting involved. Rabil, who has witnessed big changes on the business side of Hubs during her lifetime, said it will be interesting to see what ideas he brings home with him.

“When the business started, credit cards didn’t exist,” she said, adding that most customers mailed in checks. “Later we set up a call center to take orders, and today it’s mostly an Internet operation.

“Because I turn 60 this year, I’m thinking transition. I felt very fortunate that my parents were by my side to hand me the reins. Not all family businesses transition well. Lucky for us we have very good longterm employees and a next generation that seems interested.”

Over the years, the Hubbards’ fiveroom white clapboard house has been expanded to include a commercial kitchen and warehouse, but the feeling of home has remained strong— and forever associated with the aroma of peanuts.