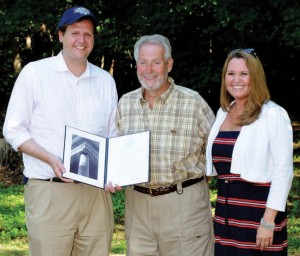 One of Longwood’s most popular faculty members is now also an alumnus.

Jim Jordan, professor of anthropology and sociology, recently received the Horace Mann Honorary Alumni Award from the Alumni Association for his “extraordinary service, his positive impact on the lives of thousands of alumni and his example as a true citizen leader.”

Jordan is the third recipient of the award— the others are former president Patricia Cormier and her husband, Raymond Cormier — and he is the 13th person to be named an honorary alumnus / alumna.

The award was presented June 8 during the 13th Annual Field School Alumni Weekend and Crew Luau held at the Willie C. Pettus Archaeology Field Station in Clover, site of the field school. The location was fitting — Jordan established the field school in 1980 and it was named in his honor by the Board of Visitors in September 2012. The award was presented by Kathleen Early ’92, president of the Alumni Association, who was a field school participant in 1991 at the same time as Brian Bates ’92, then a Longwood student and now field school director and associate professor of anthropology. The ceremony was also attended by 47 field school alumni, 45 current field school students and their families, and President W. Taylor Reveley IV.

“A wise Sioux medicine man, Black Elk, famously said, ‘Let my people live once more,’ and that is exactly what the field school and Dr. Jordan have allowed the past to do,” said Early just before presenting the award. “There is likely no other Longwood professor who has influenced his students as much as Dr. Jordan.”