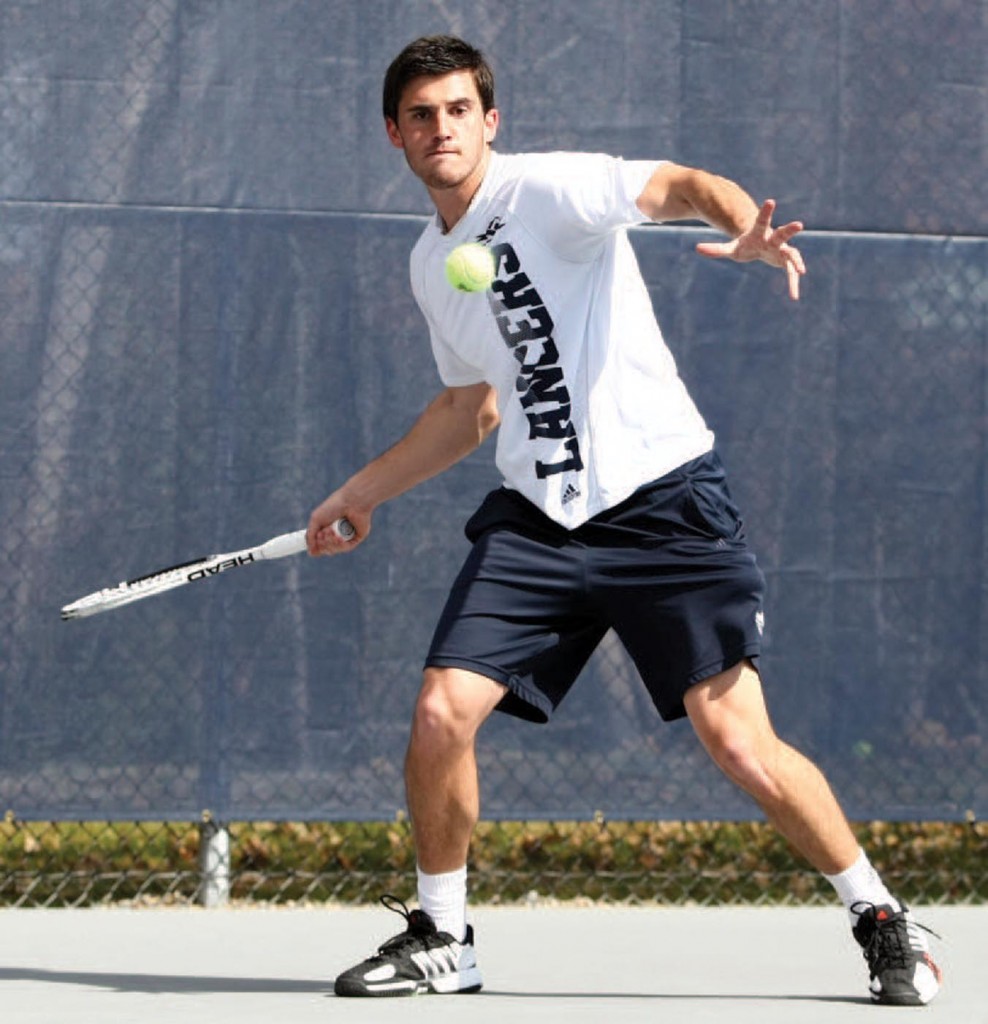 Georgi Khmiadashvili ’13 played out of the No. 1 singles position on the men’s tennis team.

The Lancer baseball season was marked by the retirement of longtime head coach Buddy Bolding, who led the team for 35 years and compiled an impressive 953-544-4 record. In his remarkable stretch at the helm, Bolding posted 31 winning seasons, and 25 seasons with at least 25 wins. 2013 was no different, as the team went 26-28, and 12-12 in its first season in the Big South—good enough to earn one of eight spots in the championship tournament. Surprising many, the team went 2-2 and advanced to the conference tournament semifinal. Sophomores Aaron Myers (4-2, 3.30 ERA, 10 saves) and Brandon Vick (6-5, 3.95 ERA) led the Lancers’ pitching staff, while jun- ior captains Matt Dickason (.331, 13 2B, 18 RBI) and Scott Burkett (.304, 4 HR, 30 RBI) led the team offensively. Vick was named to the Big South All-Academic Team, while junior captain Alex Owens (.281, 4 HR, 32 RBI) was named to the All-Big South First Team.

Junior Dylan Jensen paced the Lancers golf team all year with a 75.87 scoring average and earning individual medalist honors at The Manor Intercollegiate for the second straight year. He was also the event’s first two- time winner. As a whole, the team — led by 16-year head coach Kevin Fillman — finished 10th at the Big South Championship. Longwood could return as many as seven lettermen. The team also received the Cormier Award for Academic Excellence for the highest team GPA over the past two semesters. Junior Kyle Bodin was selected to the Big South All- Academic Team.

Longwood, coached by eighth-year head coach Ali Wright, finished third at the Big South Championship. The Lancers posted four top-five efforts among their seven top-10 finishes overall. Junior Amanda Steinhagen, who led the team with her 75.81 scoring aver- age, led Longwood in scoring throughout the year and was named to the All-Big South Team. Junior Hannah Pierce was selected to the Big South All-Academic Team.

Three lacrosse players were named to the All- Big South First Team from a Lancers squad that finished 10-8 overall, including a 5-2 mark in Big South games. Under the direction of first-year head coach Elaine Jones, the team placed third in the conference standings at the end of the regular season to advance to the semifinals of the Big South Championship. Junior Lauren Prasnicki, with 26 goals and 51 assists, led the team in total points and assists, a category in which she set a school season record. Prasnicki, senior Jamie Brentlinger and junior Kathleen Battle were named to the All-Big South First Team, while junior Mary Barondess (33g, 7a, 40p) received All-Big South Second Team accolades. Brentlinger was also selected to the Big South All-Academic Team. In addition, Brentlinger, who led the team in goals, and Battle both earned spots on the Big South All-Tournament Team.

Longwood, coached by second-year head coach Jakob Gustafsson, finished with an overall record of 7-14, 1-8 in the Big South. The Lancers won their first-round game in the Big South Championship, defeating Gardner- Webb, 4-3, to advance to the quarterfinal where they fell to eventual champion Winthrop, 4-0. Sophomore Malin Allgurin led the team with her 19-11 overall record in singles, including 8-8 at No. 2, and she was 17-12 overall in doubles, including 11-8 at No. 2. Senior Marta Pinyol was selected to the Big South All-Academic Team. Junior Bethany Law received Longwood’s Female Academic PRIDE Award. The team also received the Cormier Award for Academic Excellence for the highest team GPA over the past two semesters.